You have to admit, it’s unbelievable, huh?  An amusement park actually closed over a head scarf?  Arrests were made?  Yes, all of the above are true….and this is a story that generated some fairly adamant responses, too.  Here’s how it went down: Rye Playland, and amusement park in Westchester County, NY, was closed Tuesday after police scuffled with Muslim women that were upset that they were barred from riding certain rides while wearing their head scarves.  I know, I know…but hold on for a second and let me finish telling this one.  Seriously, you’ll love it.  The park, as the story goes, was packed with Muslims celebrating one of their holidays – the one that marked the end of their holy month of Ramadan.  One of the Muslim women began arguing with police over the park’s rule about the head scarves.  It’s important to note that the rule is not Muslim-specific and was put in effect about three years ago to prevent hats from falling on the tracks of roller coasters and certain other rides.  Fair enough – makes sense to me.  Why should one John Deere cap-wearing dude put everyone at risk because he was ‘yee-haw’ing’ it on a coaster?  So here we are with a Muslim arguing with a cop…and it gets better.

The woman was arguing with police and things began to get louder.  She was yelling at the police officers, they were trying to arrest her and, while this was transpiring, her sister, "went to try to protect the woman and was beaten by cops and also arrested.  Her brother, 20, was pushed to the ground and taken into custody when he tried to help his cousin."  Got that, right?  You read those things thoroughly?  It’s important and we’ll come back to that.  The woman being interviewed went on to say, "She just wanted to get on a ride.  That was it.  It’s clear, this all happened because we’re Muslim."  Keep in mind that, with over 3,000 Muslims in attendance and this getting our of control, there were about 100 police officers that responded.  Two park rangers were injured in the scuffle.  Another woman said her brother, husband, and father were all tackled by police and put into handcuffs when they tried to help her sister.  The two women that initiated this fracas said they were unaware of the park’s rule until they attempted to ride the ride.  After hearing o said rule, they asked for a refund and it turned into this situation.  She also said her 4-year old was traumatized by seeing his father put into handcuffs.  It is important to note that Peter Tartaglia, deputy commissioner of Westchester County Parks said the Muslim American Society of New York was warned about the rule banning head scarves and, "we painstakingly told them over and over again, is that certain rides you cannot wear any sort of headgear.  It’s a safety issue for us on rides.  It could become a projectile."  You know what?  I don’t care what these scarves, hats, etc could become.  If it’s a rule, it’s a rule.  Of course, the president for the Council of Islamic-American relations-New York felt that, "in this heightened state of Islamaphobia, a woman wearing a hajib is an easy target these days."  So there’s the story.  Now, somewhat like Paul Harvey, I’m about to spout off with my own personal opinion…and for those that know me, you know you might want to buckle your seat belts and keep your hands and feet inside the ride at all times.  Hats, too, apparently. 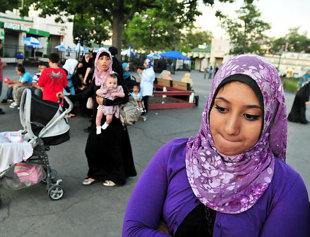 I read the article, then combed through the replies at the bottom of the page…then the next page…then the next.  I am still waiting for someone to voice an opinion that says this was anything BUT a group looking for a reason to fight.  The rules are the rules, especially if they pertain to safety.  I don’t care if it’s a cap, a scarf, or a handkerchief.  If it’s a rule of the park, it’s a rule.  Period.  The other point that was made, and I am certainly one to agree with it is, when a police officer is making an arrest, don’t mess with them.  They tried to "help" their siblings while the cops were arresting them?  Seriously?  Are you insane?  You actually wonder WHY they arrested you?  Here’s a news flash – Even we white Americans would have been slapped around and arrested for such a stupid, thoughtless move.  Let me ask it this way – if this had happened in your native country and you tried to "help" while they were being arrested, do you think it would have stopped with another arrest…or a bullet?  Along those same lines, what if an American woman went to and Islamic country and tried to get away with NOT wearing a hajib?  Do you think your homer countrymen would be so understanding?  We all know the answer.

I feel it is important to note this – I, and most everyone I know, am not racist or anti-Islamic.  It’s not for lack of reason.  Ask us how we felt ten years ago.  Yet here we are, ten years later, and you expect us to be sympathetic when you pull THESE stunts?  I find it, quite honestly, appalling that you are that intolerant of our feelings.  Why, if it is so hard to live here, did you move to America?  If our rules are so incredibly hard to follow, why not move home?  What brought you to this country?  Was it, per chance, that there is freedom here?  Was it because, no matter what you do, you are not locked up or persecuted?  My guess would be a resounding, "YES!!!"  Listen, we can be very understanding and, more than most others around the world, tolerant of your beliefs and customs.  We might not understand, but we can be tolerant for the most part.  Please do not push it.  The most refreshing comment I read in regard to this story came from a Muslim woman that said, in part, that she believes they should have been abiding by the rules and their actions were unacceptable.  Thank you.  If you want to live here, in peace and harmony, do NOT expect us to give you any more than we expect.  Unfortunately, the American way is not to ‘expect’ things, but, rather, to work for what you want to achieve.  THAT is the America we know…and the one for which you came.  Respect it…and us, please.  We’ll do the same.

Filed under: Opinion, World
Share Tweet Pin G Plus Email
previous article: Dandruff: Find solace in the fact that it can only be controlled but not eliminated
next article: How to Make Lokpal Bill Effective – The Debate Continues