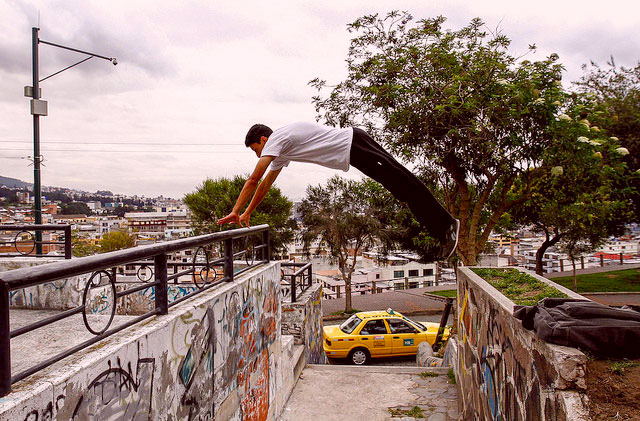 The year, 2016 has been a year of new innovations and increased trends, especially in sports. With the growing popularity of major sports such as basketball, soccer, and football, people tend to quickly forget about exciting and engaging sports like Parkour.

Nowadays, parkour events scarcely pop up on sports channels, causing many people to wonder if parkour is still popular in 2016. Well, parkour fans all around the world still anticipate the ever-exciting parkour challenges.

According to the official rules stated by the Guinness World Records, the contestant must perform the backflip over a bar, without making any contact with the bar or knocking off its hinges.

Both Amadei and David managed to achieve staggering heights of 3.40 meters, but Li Xingnan from China smashed the record, achieving a magnificent 3.70-meters wall-assisted backflip.

Titanfall 2 is a highly-anticipated video game for many gamers and is set to be released in 2016 by Electronic Arts.  This video game has the usual assortment of online multiplayer modes, like capture-the-flag team games and every-man-for-himself free-for-alls.

Titanfall 2 and other interactive games usually require a  to make the game less predictable. Parkour also helps to add more uniqueness and creativity to a wide range of video games. From backflipping and jumping across high areas, Parkour never fails to intensify gaming character movements with great flexibility and agility.

Most game developers desire to create highly interactive games for different platforms. In fact, Mirror’s Edge: Catalyst – a Parkour-inspired video game set to release the summer of 2016, aims to capture some of Singapore’s tallest buildings.

Choreographing the parkour performance will be the legendary Francois ‘Forrest’ Mahop. The parkour displays are expected to blow the roof off, using the amazing Roundhouse architecture in a unique and creative way.

The current popularity of Parkour isn’t limited to just performances and challenges. Most people believe in the freedom of running. For some, it’s playing the role of movie characters, running and jumping across the roofs of buildings in slow-motion like Spiderman.

One Parkour rooftop runner wasn’t so lucky as he got himself into some trouble with the police in Horsham. The 24-year-old man from Horsham was one of the two men spotted running on the roofs of building in West Street. Maybe they came to save the day! Don’t you think?

Both men were pursued by the nearly on-duty police officers. The 24-year-old man has been issued with a community resolution for criminal damage and was fined £200 to compensate the damage.

Does the Amazing Spiderman worry about getting injured while swinging and jumping from one rooftop to the next? Well, PC Munden of the Horsham Neighbourhood Policing Team stated that “The activity is an ongoing issue in Horsham and some other parts of Sussex, and it is extremely dangerous and can result in serious injury or death.“

Parkour is easy! All you need is a quality pair of parkour shoes and you’re good to go.

Engaging in Parkour doesn’t mean you have to be an expert with years of experience. With determination, vigor, and dedication, you can master Parkour without overwhelming your body in practice.

Parkour is a great sport for working the different muscles in your body. By performing a range of jumps and kicks, you can stretch your leg-and-arm muscles for the ultimate body tune-up.

Movies such as the Amazing Spiderman and other action movies are all influenced by Parkour. In fact, Parkour plays a significant role in helping characters to perform certain moves and acquire different skills.

Filed under: Athletics, Sports
Share Tweet Pin G Plus Email
previous article: Do You Know What You Are Eating?
next article: Computer Classes for Children at iCode Frisco Campus