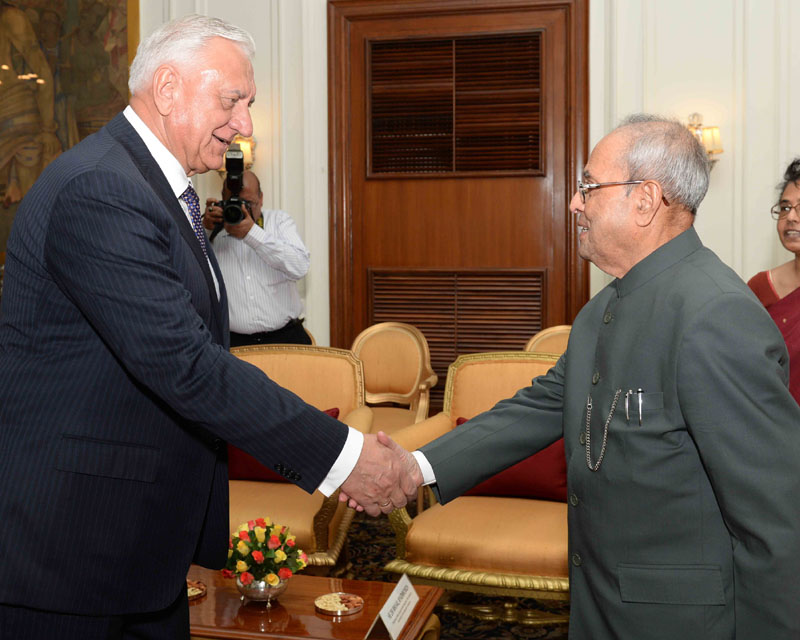 The Chairman of the Republic of National Assembly of Belarus, Dr. Mikhail Myasnikovich calling on the President, Mr. Pranab Mukherjee, at Rashtrapati Bhavan, in New Delhi on May 11, 2016.

New Delhi (PIB-GR-TYP-BIN): A Parliamentary Delegation from Belarus led by Dr. Mikhail Myasnikovich, Chairman of the Council of the Republic of National Assembly of Belarus called on President of India, Mr. Pranab Mukherjee at Rashtrapati Bhavan on May 11.

Welcoming the delegation, the President recalled his meeting with Dr. Myasnikovich in Delhi in November 2012 and in Minsk during President’s visit to Belarus in June 2015. He thanked Dr. Myasnikovich for his active support and contribution to the elevation and diversification of India-Belarus ties. He expressed hope that the current visit of the Parliamentary delegation will further strengthen these ties.

The President said the year 2017 marks the 25th anniversary of the establishment of diplomatic relations between India and Belarus. There is need to work together to raise the level of India-Belarus bilateral trade from the existing level of US $ 445 million to reach the US $ 1 billion target by 2018 set by the two sides during the 7th Inter-Governmental Commission meeting in Minsk in September last year. He expressed confidence that the large business delegation accompanying Dr. Myasnikovich, representing various sectors of Belarusian economy, will further augment and diversify bilateral trade and economic relations between the two countries.

Responding to the President, Dr. Myasnikovich said the people and Government of Belarus were touched by his visit to their country in June 2015. They are closely monitoring progress in implementation of the agreements signed and roadmap agreed upon.