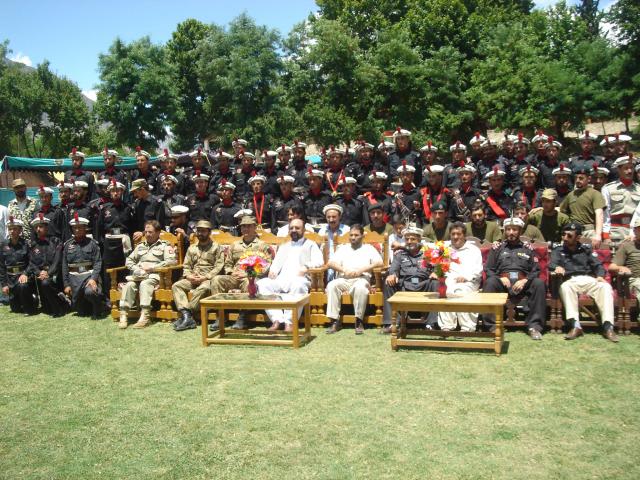 CHITRAL: Annual Passing out parade and oath taking ceremony of Chitral Border Police force was held at Chitral Scouts Drosh Cantonment.  Commandant Chitral Border Police Rahmatullah Khan Wazir who is also District Coordination Officer of Chitral was chief guest on the occasion. The ceremony was started with the recitation from the Holy Quran. Chief Guest (commandant border police  was given guard of honor at Drosh ground and he checked passing out. Newly recruited Chitral border police completed their recruiting training in 17 weeks who paid solute to chief guest on Balcony at Drosh ground. Newly recruited border police  comprising over 72 soldiers were also administered sworn during oath taking (swear) ceremony who sworn to scarify their lives for the sack of motherland and to protect borders of Pakistan. Chitral scouts band ground were performing very sophisticatedly. Addressing to the cobs DCO Chitral stressed on newly recruited force to be ready any time for sacrifice their lives and to protect the country borders from outsiders and internal enemies. He said these border forces will a support group of Pakistan Army, Scouts and police.   He said that Chitral is a vast and big district of KP having hundred of kilometers long border with Afghanistan where infiltrations time and again come here for their illicit aim. But now our border police will stop their way. He said we are trying of our best to increase their numbers to 1500 and at present some 500 border police have been deployed at different points on border areas. The most attractive event of the passing out parade was Commando Action Display by newly recruited Border police which was highly appreciated by participants and spectators in the ground. Passing out parade was ended peacefully and successfully which was attended by a large number of civil and military officers as well as citizen of the area. At last chief guest awarded to best position holders and a sepoy was also promoted to Lance Nike.  This is third Passing out parade of Chitral Border police earlier that annual two passing out parade were held after arrival of DCO  Rahmatullah Khan Wazir who is keen interest in promoting of Border police force. Wing commander 5 Wing of Chitral Scouts Lt Col Salman But was also present on the dais.
G.H. Farooqi C/O Manager bank Islami Main branch Chitral phone No 0943-320737, 316052, 414418  , 03025989602, 03337069572, 03159698446, 03469002167
email: gulhamad@gmail.com
Filed under: Business, Lifestyle
Share Tweet Pin G Plus Email
previous article: On Today’s Sociopaths — and How to React to Them
next article: A good worker must posses excellent skill and be efficient worker