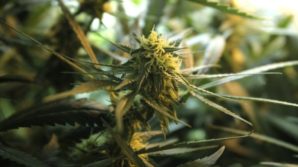 There’s data to support the notion that pot, or a drug based on its active ingredient, could help ease the fears of PTSD.

The state of Arizona has made it nearly impossible  for post-traumatic stress disorder (or PTSD) patients to gain access to medical marijuana.

PTSD is a serious anxiety disorder that often develops when a person endures a disturbing experience such as sexual abuse, military combat, or any number of instances which result in near-death or serious injury. Regulated cannabis has proven to alleviate some of the most common symptoms, such as anxiety, traumatic memories, and insomnia.

If you see the actual reporting form that must be signed by a physician in Arizona for those patients seeking medical marijuana it doesn’t include PTSD (source: http://www.azdhs.gov/medicalmarijuana/documents/physicians/MMJ_PhysicianCertificationForm.pdf).

Only a small handful of states allow the prescription of medical marijuana to patients with PTSD, with officials elsewhere admitting reluctance because they fear many people will lie about having the anxiety disorder to gain easy access to the drug.

Arizona, unfortunately  is not one of those states, as such people with PTSD are encouraged to file lawsuits against the State of Arizona based on the fact that the state enacts unfair conditions that make it a needlessly arduous process to acquire the drug.

“Really only real remedy to change the unfair law is a legal course of action and sue the hell out of them”, said one attorney (who did not wish his name to be used in this report out of fear of retaliation by the police of the state of Arizona.

One veteran who suffers PTSD put it this way:

“I am a disabled veteran. Yes, I smoke my herb not because I can, but because considering, Id rather smoke and chill out than take all the medications the VA and the side effects (with all their contraindications) which was up to 9! Id rather smoke a dube’ with another vet whose BTDT than sleep all day. Other important reasons:
1. It saves all the tax money spent to the pharmaceutical companies, who our government are slaves too.
2. Try taking 9 medications throughout the day on a timed schedule.
3. Its natural and I can grow it myself.” (source: Facebook).

General use of cannabis for PTSD Symptomshttp://veteransformedicalmarijuana.org/content/general-use-cannabis-ptsd-symptoms

Filed under: Healthcare, News
Share Tweet Pin G Plus Email
previous article: What to do if you disagree with your clinical psychiatrist’s evaluation of your mental illness
next article: Leh celebrates 65th Republic Day