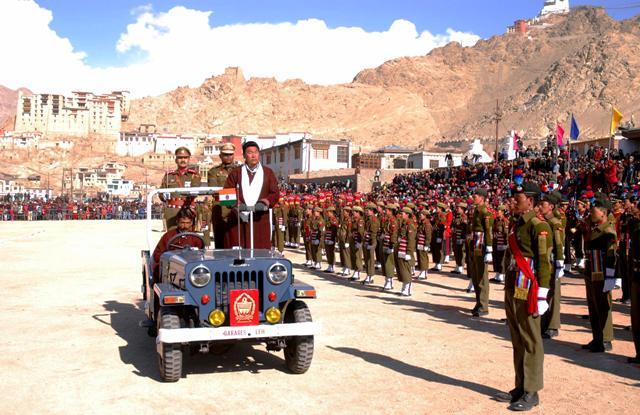 Addressing a large gathering, after unfurling the tri-color, Mr. Dorje highlighted the supreme sacrifices offered by the leaders for achieving freedom from the slavery of British rulers. He appealed the people to contribute in upholding the sovereignty and integrity of the country.

Referring to the landmark achievements in Leh, Mr.Dorje said that Ladakh Vision Document envisages economic self reliance and equal opportunities of development and prosperity to the people of the region. He said that Trans-Singhela area will be connected soon by completion of Rs 50 crore road project. He said the works on, as many as, 325 road projects and bridges are in  full swing in the district.

The CEC said that LAHDC has been empowered to implement power projects upto 2 MW and as such. Detailed Project Reports of a number of micro hydel projects, to be executed in various villages of different blocks of Leh, have already been submitted. He said the execution on these power projects shall be carried out in collaboration with the NHPC and in this direction LAHDC and the NHPC will sign on a Memorandum of Understanding (MOU) very soon.

Under AIBP programme, there are seven major irrigation project are apace at a cost of Rs 28.80 crores, Mr. Dorje added.

A colorful cultural programme was also presented on the occasion.

Speaking on the occasion, the Chief Executive Councilor recalled the supreme sacrifices of the national heroes who laid down their lives for the sake of the country. He called upon the people to protect and strengthen the age old tradition of brotherhood and communal harmony. He appreciated the spirit of the people of Kargil for maintaining religious tolerance and peace over the years.

While presenting a brief over view about the developmental activities undertaken by the Hill Council, Kargil, he said that in order to facilitate the students of Kargil pursuing studies outside the state, the boys hostel at Srinagar is soon expected to get functional, while the boys hostel at Jammu in under speedy construction at a cost of Rs. 1.25 crore. He also said that for the convenience of patients of Kargil who have to travel to for specialized treatment, a patient sarai at Nowshehra, is in its completion stage. Regarding the present state of road connectivity in the district, he said that the up-gradation and mecadamization of Kargil-Panikhar road is being carried out under PMGSY scheme. In the first phase, Rs.27 crores is being spent on the mecadamization of the road stretch between Kargil to Sankoo.

Kacho Ahmed Ali Khan also lauded the efforts of the Army and police forces for their commendable job in safeguarding the borders, and maintaining law and order in the district. Later, the CEC distributed prizes among the contingents.

He also distributed awards among 38 persons for their extra ordinary services in the spheres of effective administration, art, culture and languages and education. Among these 28 people were awarded for the meritorious services rendered by them during the Zojila crisis in November last year, which included the Executive Councilor for Agriculture, Haji Ghulam Amir, Executive Councilor for Tourism, Punchoq Tashi, Superintendent of Police, Ajaz Ahmed Bhat and Project Director, DRDA, and the then Deputy Commissioner Kacho Mohammad Shah, and the Additional Deputy Commissioner, Tsering Muroop.4 people were awarded for their extraordinary contribution in the promotion and preservation of culture, and 6 school students were awarded for securing first, second and third positions in the 10th and 12th class board examinations.