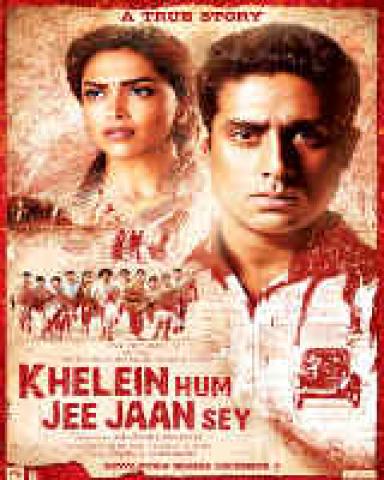 It was somewhere in the middle of the movie ‘Khelein  Hum Je Jaan Se’ when a bunch of revolutionaries attacked British installations, I glanced over at my wife, who had an expression on her face that was excited. In fact, the film brings back our patriotism.Based on journalist Manini Chatterjee’s book Do and Die: The Chittagong Uprising 1930-34, the film ‘Khelein  Hum Je Jaan Se’ (We played very hard) directed by Ashutosh Gowariker revolves around Surjya Sen, a school teacher of Chittagong, then a district of undivided Bengal (now in Bangladesh) who was the leader of the team of 64 revolutionaries and the mastermind of the April 18,1930 Chittagong uprising. The team included fearless young lady Kalpana Dutta (played by Deepika Padukene), Pritilata Waddedwr (vishakha Singh), Nirmal Sen ( Sikender Kher), Ganesh Ghosh (Samrat Mukherjee), Anant Singh (Mahinder Singh), Ambika Chakraborty (Shreyas Pandit), Loknath Bal (Feroze Wahid Khan).These men and kids sacrificed their lives for the sake of the mother India.But, these important event wiped out from the history for ever.On that day these bunch of Young men and kids divided into smaller groups and simultaneously attacked important British installations like British armory, post & Telegraph office, railway station,European Club of Chittagong. According to critics, it’s a wonderful film because it helps us to rediscover forgotten heroes.The film pays tribute to the freedom fighters of our country who sacrificed a lot.