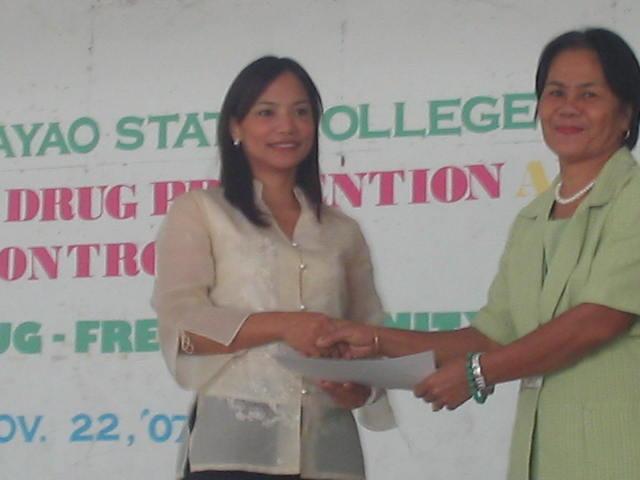 Following its mandate as the main implementer of the anti-drug law (RA 9165 – Dangerous Drugs Act of 2002), the Philippine Drug Enforcement Agency (PDEA) – CAR visited some schools in the community, with the leadership of Regional Director P. Supt. Oliver Enmodias, from November 21-22 to hold symposia with students.

St. William’s Academy, St. Louis College of Bulanao held the symposium on the 21st while the Kalinga-Apayao State College had its turn with the Regional Director on the 22nd.

For the KASC affair, Hon. Alma Sandra Uyam, City Council Chairperson on Environment and Health, briefed the students on the city government’s plans and accomplishments with regards to the city’s problem on drug abuse and drug-pushing.

“You, the youth, are our immediate concern when we speak of drug abuse because you may be easily influenced to try these things,” the Councilor said in her message. “That is why the City Government of Tabuk is seriously taking steps to save you from such self-destruction.”

During P. Supt. Enmodias’ turn, he gave a visual presentation on the effects of drug abuse. Also, he discussed why people turn to drugs, emphasizing peer pressure and the adventurous spirit of the youth to try new things.

The Regional Director also enlightened the youth on the history of PDEA. He said that the enactment of RA 9165 reorganized the Philippine drug law enforcement system.

The Regional Director ended his talk by enjoining young men to join PDEA as employees in the third level positions which the agency has opened recently. Successful applicants would be detailed to the Legal and Prosecution Service and in the Internal
Affairs Service.