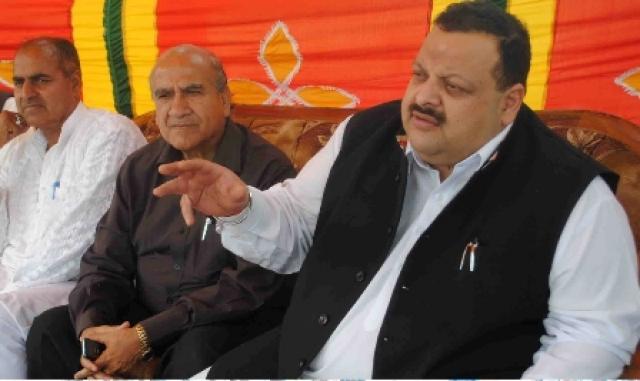 Nagrota/Jammu, August 12 (Scoop News) –  Political Advisor to the Chief Minister Devender Singh Rana said that PDP and its leadership which is today claiming to be the champion of democracy in the state of Jammu and Kashmir is infact responsible for thwarting  and derailing the democratic process in the state through politics of conspiracies and deceit which manifested loud and clear in the events of 1977, 1984,1987,1989,1990,2008 and these all need to be explained by the PDP leadership which is a fountain of conspiracies, falsehood and deceit.

Rana who was addressing party workers meeting at Dhokwaziran in Nagrota assembly constituency here today said that PDP’s opportunism can be gauged from the fact that having been rejected by the Congress they are ready to join hands with a communal BJP. He said he PDP leadership is shamelessly praising the same BJP which they have been ridiculing all along. They are now finding faults with the Congress that they unconditionally offered to support after 2009 elections going even to the extent of offering unconditional support so long as the National Conference does not come into power. “They are power hungry and waiting to grab power and ready to make any compromise whatsoever for that”, he said.

Rana said that the polity of the state and the country as a whole has changed and is looking towards a clean, honest, accountable, transparent political setup which is not based on small political machinations but on a vision for the larger good of the people.

Political Advisor said it is unfortunate that while the PDP leadership today is crying hoarse about the power crises in the state during their three year tenure they did not initiated even a single power project which could have helped today to improve the power scenario in the state. Rana said had even Rs. 1000 crore out of Rs. 3900 crore had been spent on power reforms during 2002 to 2005 the power scenario today would have been much better. On the contrary, Rana said that between 1996 to 2002 Baglihar and Sawlakote were started and the present Omar Abdullah led coalition government has initiated various power projects which include 93 Mega Watts Ganderbal, 450 MW Baglihar Stage-II, 37.5 Mega Watts Parnai, 1856 MW Sawalakote, 240 MW Karthai, 250 MW Lower Parnai and 990 MW Karthai-II, 600 MW Kiru, 520 MW Kawar and 1000 MW Pakal Dul and 850 MW Rattle project has been taken up and other projects are under various stages of their execution.

Rana said in order to enhance the employability of educated youth and opening of new avenues of employment in them, Omar Abdullah led government has focused on skill development all across the state. He said about 23 Degree Colleges, 18 polytechnic colleges and over a dozen of ITIs have been opened in the state.

Addressing the meeting Rattan Lal Gupta, Provincial President J&K National Conference said that during the last more than three years of the coalition government under the leadership of Omar Abdullah has kick started many developmental projects and laid out many developmental plans to be carried out in the next coming years.