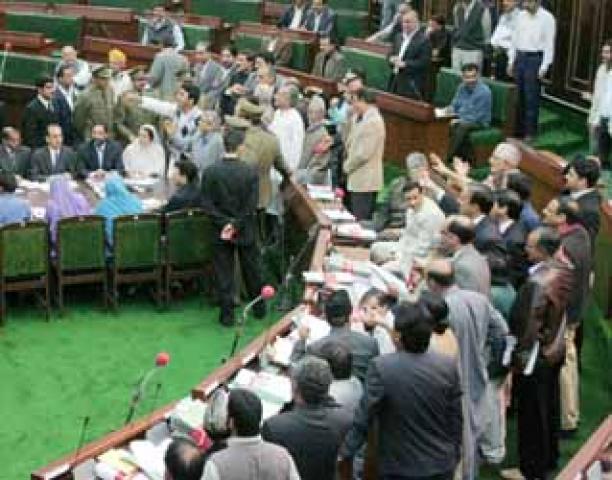 The Resolution moved by Peerzada Mansoor Hussain of PDP Party, regarding re-naming of Anantnag district as Islamabad was  took up for discussion but the proceedings remained inclusive, as the House was adjourned till Monday.

The resolution regarding changing of name of Anantnag to Islamabad in official records moved by Peerzada Mansoor Hussain, BJP’s Chaman Lal Gupta said they are hell bent on Islamisation of Kashmir after forcing over four lakh Kashmiri Pandits to flee the Valley.

Later talking to reporters Prof Gupta said it shows the mentality of Kashmiri leaders. They wanted now to name Anantnag as . Previously there were 12 percent Hindus in Valley in 1947 whose number has decreased to one percent now. Likewise there were 30 percent Hindus in PoK and now their number has reduced to nil and no body is concerned about it, he added.

Earlier Minister for Industries and Commerce, Surjit Singh Slathia has said in the Legislative Assembly in Jammu on Saturday evening that government shares the concern of people regarding unemployment in the State and added that in this regard, the government would come up with an effective policy to deal with it in the ensuing Budget Session.

. Slathia was responding to the Resolution moved by Prof. Chaman Lal Gupta in the House today, regarding provision of jobs or subsistence allowance to unemployed youth till they get employment. He said that the Government would explore all possibilities in private sector to create more jobs for the aspiring youth. He further said polytechnic colleges would be set up at every district and existing polytechnics would be strengthened. He said that five battalions of police accommodating about 5000 youth have been created, for which recruitment is going on.

The Resolution was rejected by the House when put to vote.

Mir Saifullah withdrew his Amendment when Slathia assured him that creation of Overseas Employment Corps would be considered by the Government.

(Due to net faliure, can’t despatch story in time)