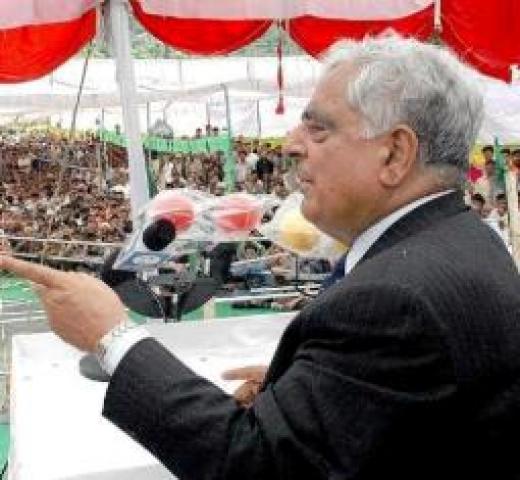 , November 30 (Scoop News) –Reiterating resolve of his party to remove regional disparities and to treat all regions equally in all spheres of life, former Chief Minister and patron of Peoples Democratic Party (PDP) Mufti Mohammad Sayeed today said that PDP led regime had set an example of equitable and balanced development in .

“After 1947, first time all regions were treated equally in the development and other decision making process and credit for this goes to the PDP-Congress regime which was formed in  the year 2002”, said Mr Sayeed while addressing meeting of the senior workers of Jammu urban unit of the party in connection with the preparations of the civic bodies elections.

He said that after 2002 sincere and successfully efforts were made to empower all regions to remove the sense of inequality and discrimination. “During the tenure of PDP-Congress coalition, all elected representatives irrespective of their party affiliations were involved in the developmental activities and equal funds were distributed in all regions and sub-regions”, he said and pointed towards various developmental projects started in Jammu city during that period. He especially mentioned a number of beautification projects initiated and implemented during that period.

Mr Sayeed said that PDP led coalition regime has laid a foundation of mutual trust and confidence among inhabitants of different regions and sub-regions of the State. "Our government treated all regions equally but backward and ignored regions were given special attentions", the PDP patron said and challenged his opponent to come with any evidence of discrimination with any regions or sub-regions during his regime.

He recalled that during PDP-Congress regime Prime Minister Dr Manmohan Singh had sanctioned huge amount for the development of the State. “Furthermore Asian Development Bank (ADB) and other institutions had also released huge developmental funds for the State”, he said, adding, “programmes like PMGRYS, Jawaharlal Nehru National Urban Renewal (JNNURM) were implemented in the State during their regime”.

Calling upon the party activists to spread message of PDP in every nook and corner of the state, Mr Sayeed said that document of Self-Rule prepared by his party is the only viable solution to address aspirations of all sections of the society.

"Establishing lasting peace and to consolidate the reconciliation process is on the top of the agenda of PDP ", Mr Sayeed said and made it clear that main aim of forming PDP was to fulfill aspirations of the people of Jammu and Kashmir and to establish peace in this region.

In the meeting party workers assured that they would take up message of the party in each part of city to educate the people. Workers in one voice assured the leadership that they would work overtime to strength the party in new areas. Workers further said that during their door to door campaign in the city they would highlight the historic steps taken by Mufti Mohammad Sayeed during his tenure for the beautification of city.