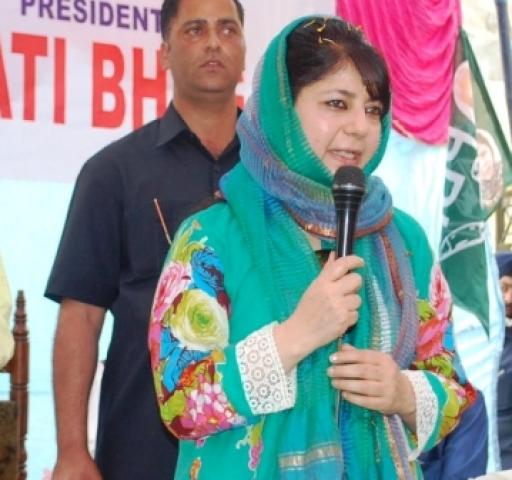 She said though the foreign ministers of the two countries had agreed a year back to expand the scope of trade and travel  across the LOC  it was disturbing that no progress had been made on these decisions inspite of a welcome  change of pace in improvement of relations between  the two countries. She said full economic potential of different regions of J&K can be realised  by lifting a seige arround the state and carrying forward the process that was started by the PDP in 2002 and demanded that the facility of travel across LOC be extended to all the citizens of the state irrespective of the divided nature of families. She said more routes need to be opened, frequency of bus service increased, hassles removed in trade and travel and banking and communication facilities provided for development of full trade relations.

Mehbooba said the seeds for the present bon homie between and were sown with the new discourse and idiom introduced by the PDP to which the people of the state had responded positively. “For decades NC had been advocating war between two countries to solve Kashmir problem, but we replaced that war mongering by our plea for better relations, trade, travel and joint ventures”, she said and recalled how Prime Minister Vajpayee had been able to strike the right chord with the people  of the state on seeing their urge for a peaceful resolution through civilized means .

The PDP president said Poonch and Rajouri had to a great extent been brought out of isolation as a result of the opening of Poonch Rawalakote road and construction of the . She said the area which in the after math of the partition  had been reduced to a dead end is now enjoying its status as a vibrant part of the society on either side of the Pirpanjal. She said even though many governments had toyed with the idea of constructing the road between valley and Poonch Rajouri, the plans had failed  for one reason or the other and it was only Mufti Mohammed Sayeed whose courage and vision could make it possible. She said connectivity between various regions is an important element of the vision that PDP has presented. “We want all weather roads between Ladakh and Kashmir, Kashmir and Jammu through Doda and Poonch Rajouri alignments as well so that the atmosphere of mistrust and other differences are neutralized and the state grows as one homogenious entity while retaining its precious diversity of cultures” she said.