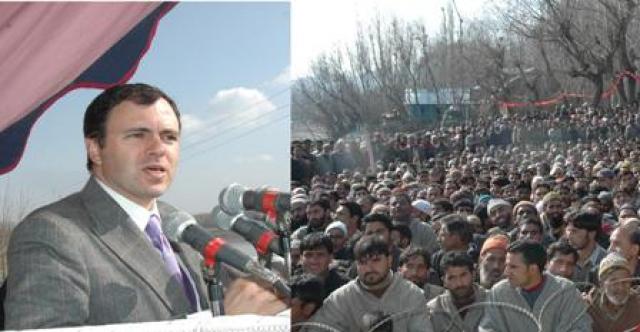 Kalakote-J&K, February 15 (Scoop News) J&K Chief Minister,Omar Abdullah today  said that the records in Legislative Assembly are testimony to the fact that PDP voted against the resolution, moved by the CPI(M) leader,  M. Y Tarigami, and supported by the National Conference regarding the surrender and rehabilitation of the youth, who had crossed across LoC and borders during militancy.

Addressing a mammoth public meeting here,  Omar said that“Some people are habitual of telling lies in private while others shamelessly speak falsehood publicly”, he said, referring to the claim made by PDP that the party supported the idea regarding surrender and rehabilitation of militants.

While reiterating his Government’s firm commitment for upholding human rights and punishing the culprits on this count, the Chief Minister said that his government would not allow a handful of hooligans to hostage the tranquility in certain parts of city by the acts of stone-pelting. “The Government would deal with stern hand the law breakers”, he said, maintaining that for handling the political issues, the Centre and the State Governments are willing to talk to anyone on any subject and this intention has been made public by the Prime Minister, Dr. Manmohan Singh and Union Home Minister,  P. Chidambaram also, time and again.

Omar said that the men in uniform are law abiding force. “They protect life, property and uphold the constitution and safeguard the country”, he said, adding that it is a single sinner who brings bad name to the whole society and same is the case with forces. “Such elements would be isolated and brought to book”, he asserted. “We have made our intention clear in this regard once again by identifying and booking the accused killer of the Nishat boy”, he said.

Referring to his Government’s efforts for employment opportunities to youth,  Abdullah said that Sher-i-Kashmir Employment and Welfare Programme for the Youth (SKEWPY) to be implemented from the 1st of April, 2010 embeds greater avenues of employment and employability for the young people. “While the Government is working for creating over one lakh jobs for youth in Government sector under the policy, many more lacs of jobs would get created through the SKEWPY in private and self-employment sectors”. He said efforts have also been made to upgrade the skills of youth, especially of rural and far-off areas, so that they get jobs easily in the power and other projects under execution in these areas.

The Chief Minister said that in order to decentralize the power at the Secretariat and provincial levels, the Government wants to transfer these to the panchayats so that public representatives at panchayat  level will make decisions by themselves for launch of particular development schemes in particular areas and monitor the progress and the benefits of these schemes. “This would create a healthy work culture and ensure fullest benefit from the spending on development works in accordance with the wishes and requirements of the people”, he added.

Omar said that his Government is in close rapport with Union Minister for New and Renewable Energy, headed by Dr. Farooq Abdullah, to energize the households in hilly, backward and remote far-flung areas of the State. “We are looking for greater support from the Ministry to achieve this goal”, he said adding that the technology and new methods would help to provide electricity to the households in backward areas extensively.

Omar said that the Government has constituted Kissan Board under Vice Chairman of  Rashpal Singh for the welfare of farmers and to address their problems and open new vistas for bringing self-reliance in food grain production in the State.

The Minister of State of Power,  Shabir Ahmad Khan was also present on the occasion.

Filed under: Politics, World
Share Tweet Pin G Plus Email
previous article: Markets Reopen in Port-au-Prince, Haiti, But Many Locals Too Poor To Buy
next article: Anomie in Seoul – I’m in Trouble! at Berlinale Forum