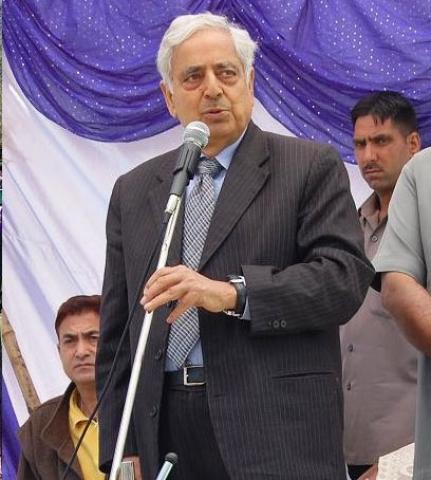 , February 26 (Scoop News) –     Seeking support of people to change the present corrupt and inefficient system, patron of Peoples Democratic Party (PDP) Mufti Mohammad Sayeed today said that credibility of National Conference (NC) led coalition regime has reached at its lowest ebb because this dispensation has lost faith of the common masses due to misdeeds.

Addressing a public meeting at Khanpur area of Nagrota  assembly segment, Mr Sayeed said that during the last three years the system has been totally collapsed because the government has eroded all institutions in the state. “Prevailing anarchy and chaos in the state is result of the failure of the system”, he said and made a reference towards remark of a high level central team that had visited after summer unrest in the Valley in the year  2010. “The high level central team had pointed out trust deficit and governance deficit as main reasons for alienation of the people”, he said and regretted that  the government during the last three years have been indulging into deceit tactics instead of addressing aspirations of the people.

Pointing towards recent exposure of some corruption cases- figuring involvement of some ministers, Mr Sayeed said that corruption has sneaked from top to bottom in the administration and even office of the Chief Minister was under scanner. “From where one can expect justice when office of the Chief Minister is under cloud”, he observed and exhorted the people to support PDP to establish transparent and accountable system to give justice to all sections of the society.

“Politics of our party is not only to attain power. Aim of our party is to restore lasting peace in this region and to establish a system where every section of the society would get justice and equal  opportunities for development and economic growth”, he said and pointed out that during its short span of three years PDP led regime had carved out a path of peace and development in the state.

“Although we had just 16 members in the Assembly, our government had restored dignity and honour of the people of through its pro-peace policies”,  he recalled and added that it was only during the regime of PDP that all regions and sub-regions were treated equally.

“By translating its promises into realities, PDP in a short span of time had earned faith and credibility of the people”, he said, adding, “Unlike other political parties PDP never bartered aspirations of the people of State for enjoying power”. He said that three year tenure of the PDP led regime was historic period in the political history of the State because that government had succeeded in involving people in the governance. “Before 2002, people had no faith in the democracy or democratic institutions it was only after 2002 assembly peoples’ faith in such institutions were restored”, he said.

Mr Sayeed further added that PDP led regime had institutionalized the recruitment process in the state by recruited more than 75,000  deserving youth in different  government departments in total transparent manner. He, however, regretted that the present regime has again resorted to backdoor appointments by ignoring deserving candidates. “We have authentic information  that thousands of backdoor appointments have been made by this regime during the last three years”, he said.

Speaking on the occasion, former Deputy Chief Minister Muzaffar Hussain Beigh said that during the three years ruling elites in the state have siphoned off whopping amounts sanctioned by the Centre for various poverty alleviation schemes in the State. “It is all due to the rampant corruption in the state that woes of poor have been mounting and funds sanctioned for their betterment and upliftment are being pocketed by those who are at the helm of the affairs”, he said and pointed out that casual approach of the government towards solving problems of the marginalized sections can be gauged from the fact that government has failed to provide even matching amount for widow and aged old pensions. He said that during the last three years ministers have amassed huge wealth by siphoning off funds meant for poor people.

Eminent doctor and spokesman of PDP Dr Sameer Koul in his address ridiculed state government for its claims of bringing peace, progress and prosperity during the last three years. He said killing of innocent people has been going unabated in the state.