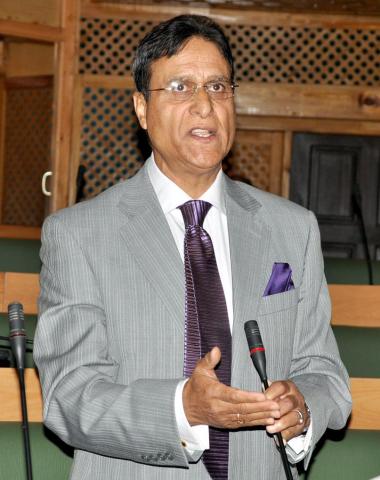 The legislator while responding to the accusation made by PDP President, Mehbooba Mufti has accused entire leadership of the party for their anti-people role and revealed in the Assembly that it was Mufti Mohammad Sayeed, who is responsible for imposing AFSPA in the State and also accused it of initiating infamous catch and kill policy. He expressed surprise on different dramatic acts, which are being staged by the party leadership by taking one u-turn after another.

Choudhary said that Central Government had not even announced 8-point package when President of PDP, Mehbooba Mufti triumphantly praised and welcomed the package and were enthusiastic on media to highlight welcome statement. But today in the Assembly, she has again adopted tactics of exploiting the death of 109 persons for her political goals, he said. He said PDP stands exposed in the eyes of Kashmiris, who have now understood the dirty and anti-people role of their party and their actual intentions to exploit blood of innocent people.

He reminded PDP the day when under the patronage of PDP leadership scores of shops, 155 residential houses were raised to ashes. He reminded them that innocent children were killed under the umbrella of their blessings. He also said enquiry initiated against the Army was got shelved by their leadership through their persons at that point of time.

Ch. Ramzan made it clear that NC will continue to work towards  revocation of AFSPA. He said  Omar Abdullah has the distinction of being the only Chief Minister to repeatedly advocate political solution to the problem. He said the Chief Minister is on record for having stated to UPA chairperson, s. Sonia Gandhi and Prime Minister, Dr. Manmohan Singh during inauguration of Ananatnag-Qazigund rail line that political initiative not economic packages hold key to address issue.

Ch. Ramzan reminded helplessness of the then Chief Minister, Dr. Farooq Abdullah regarding slapping of AFSPA by then Indian Home Minister,  Mufti Mohammad Sayeed and his selection of Jagmohan as Governor of J&K. Jagmohan, he said was not only sent by  Sayeed but he also equipped him with powers under draconian laws like AFSPA to suppress Kashmirs. He said Mufti Sayeed as Union Home Minister pioneered the implementation of “bullet for bullet” doctrine in . “How long PDP will take refuge under its dubious policies” he questioned and observed that the party stands exposed before public.