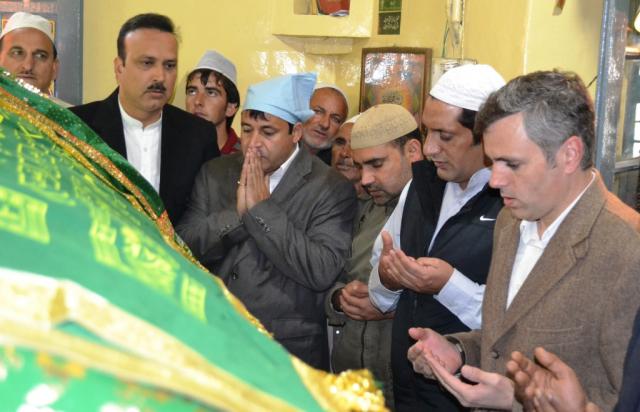 Kishtwar/Jammu, November 09(Scoop News)-Reiterating the importance of peace in the process of sustained development and economic prosperity, Chief Minister, Omar Abdullah Friday said that some elements are bent upon putting wedge between various sections of the society and creating hatred to disturb tranquillity for their vested interests.

“It has been observed that some elements are trying time and again to disturb amity and brotherhood”, he said beseeching upon people to foil the nefarious designs aimed at disturbing peace. He asked them to uphold the secular characteristic and strengthen the pluralistic fabric in the State.

Addressing the Annual Day function of Faredia Educational Institution, Kishtwar, the Chief Minister said that the peace and conducive atmosphere is all the more required for imparting education and keeping schools and colleges functional.

Omar Abdullah said that a comprehensive and equitable development process is being carried forward by his government all across the State adding that inclusive development and upliftment of backward pockets are receiving added attention. He said various mega projects have been started in the backward areas to generate economic activities and give fillip to the holistic development.

The Chief Minister said that the districts of Kishtwar, Doda, Reasi, Ramban and entire has been focused for all round development and prestigious projects in power, road communication and other sectors have been launched to address development requirements of these areas and create jobs for youth.

Omar Abdullah said that four power projects are being launched in this region to generate about 3000 MWs of power and open new vistas of economic development besides generating numerous job opportunities for the youth of the backward and remote areas. He said Chenab Valley Power Projects Limited has started work on Pakuldul, Kiru and Kawar Hydro Electric Projects while Bursur-II is also being taken up by this agency for execution. “This would open up the for all round development and economic welfare”, he said re-emphasizing the essentiality of peace and tranquillity for accomplishing the task of establishing these most prestigious power projects.

The Chief Minister said that his government is vigorously pursuing at the Union Government level sanctioning of tunnels in Kishtwar and other such areas to enhance accessibility and link up the remote areas with main highways. The Central Government has already sanctioned tunnels at Z-Morh and Zojila. “We are hopeful that Vialo-Singpora tunnel to connect Kishtwar with will also be sanctioned soon”, he said highlighting the importance of tunnels in the communication network of a hilly State like .

Laying thrust on skill development while pursuing educational goals, Omar Abdullah stressed upon the youth to acquire required skills from the ITIs and Polytechnics opened by the government and enhance the status of their employability to get easily absorbed in the power and road communication projects under implementation in . “Government has             given strict instructions to the agencies implementing development projects for employing locals and providing them opportunities of getting associated in the works under various categories so that they could earn livelihood and generate economic avenues for them and others in the area”, he added.

The Chief Minister asked the people to get advantage of Public Service Guarantee Act where under service delivery has been made time bound in the nine departments connected with this job. He said the Act would not only ensure prompt and time bound service delivery but eradicate chances of corruption at the lower level.

“You have not to move now from post pillar for getting electric or water supply connection, state subject certificate or driving license, revenue papers or house building permission, ration card or SC/ST certificates, etc but government has made it mandatory for the concerned departments to deliver these services to the people within the fixed time frame after receiving the request in this regard. Any laxity or failure by the official in providing this service would make him liable for punishment and fine up to Rs. 5000 which shall be deducted from his salary and paid to the affected consumer”, he elaborated.

The Chief Minister announced Rs. 25000 award for the participants of gymnastics presented by the students of Faredia Educational Institute besides Rs. 1000 each to the students who spoke on various subjects on the occasion.

The function was also addressed by Minister of State for Haj and Auqaf, Ajaz Ahmad Khan and MLA Sajad Ahmad Kitchloo while Minister for State for R&B, Javid Ahmad Dar and legislator G. M. Sarori were present on the occasion among others.

The Chief Minister also paid obeisance at the Dargah of Hazrat Shah Mohammad Asrar-u-Din Bagdadi (RA) and prayed for peace and development in the State and well being of people.