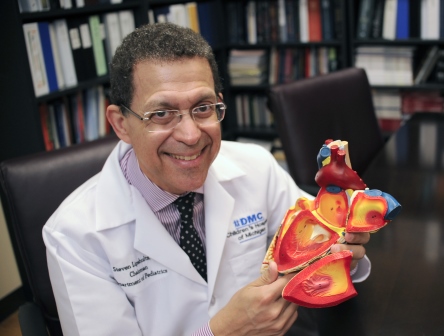 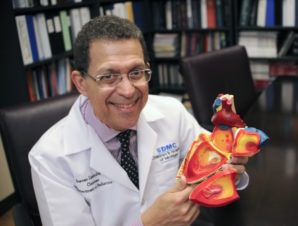 A study published today by researchers at the Children’s Hospital of Michigan DMC and the Wayne State University School of Medicine is bringing new hope to families of children who struggle with a common form of leukemia and thus must confront an elevated risk for long-term heart ailments caused by chemotherapy.

The study in today’s issue of the journal Cancer, the journal of the American Cancer Society, finally provides new insight as to how dexrazoxane protects against heart damage in children receiving one of the most common treatment for childhood cancer, anthracycline chemotherapy. Dexrazoxane has recently been established by investigators at the Children’s Hospital of Michigan and elsewhere to effectively protect the heart from anthracycline-induced toxicity in childhood leukemia and other cancers, and as a result was recently officially designated an orphan drug by the U.S. Food and Drug Administration for the prevention of cardiomyopathy for children and adolescents up to 16 years of age treated with anthracycline chemotherapy.

Even eight years after treatment for childhood leukemia, the mitochondria have been irreversibly damaged by the anthracycline chemotherapy. The affected teenagers were only able to make enough fuel for the heart muscle to squeeze strongly by making three times more of the damaged and defective mitochondrial DNA than normal. The authors expressed concerns about the long-term sustainability of this compensatory response.
However, the study demonstrated that the children who were treated with dexrazoxane before every dose of anthracycline chemotherapy eight years earlier had a normal amount of mitochondrial DNA. They were able to generate the normal amount of heart muscle cell fuel for normal heart muscle squeeze. Thus, dexrazoxane was effective in preventing the damage to mitochondrial DNA in the heart-pumping cells even years after chemotherapy treatments.

“The basic science in this exciting new study is a bit complicated,” said Children’s Hospital of Michigan Pediatrician-in-Chief and Chair of the Wayne State University School of Medicine’s Department of Pediatrics Steven E. Lipshultz, M.D., the lead author of the study, “but the take-home message is clear: Dexrazoxane is often effective at preventing the occurrence of heart-damaging toxic effects in children who receive anthracycline therapy aimed at combating their childhood acute lymphoblastic leukemia.

“These results send a very hopeful signal that dexrazoxane can be used effectively to prevent long-term injury to the heart-pumping cells in children who have received leukemia chemotherapy,” he added.

“Impaired Mitochondrial Function Is Abrogated by Dexrazoxane in Doxorubicin-Treated Childhood Acute Lymphoblastic Leukemia Survivors” was co-authored by the Children’s Hospital of Michigan/Wayne State University researcher Vivian I. Franco, M.P.H. The study was funded by the National Cancer Institute of the National Institutes of Health and involved children treated throughout the U.S. and Canada in the Dana-Farber Cancer Institute ALL Consortium and also involved investigators from Harvard, the University of Miami, and the University of Hawaii.

Dr. Lipshultz pointed out that “in this study, we wanted to look at the cells in children who had the anthracycline therapy years earlier, in order to see if the dexrazoxane protected them from mitochondrial DNA abnormalities. And we found that those who had been treated with dexrazoxane right before they received their doses of doxorubicin for their leukemia therapy … those children had a totally normal number of copies of mitochondrial DNA in their cells.

“What all of that boiled down to was the dexrazoxane-treated children in the study were being protected from the harmful cardiac toxic effects of the chemotherapy, years after they’d received it,” he added. “And that’s a very encouraging finding, especially when you realize that a high percentage of children who get anthracycline for their cancer years later develop heart problems that for some can require a heart transplant or even result in early death.”

Dr. Lipshultz also pointed out that the breakthrough study was a good example of how “clinical research at the bedside” can often provide benefits, which greatly improve patient care. “We started looking into the problem of toxic cardiac effects from pediatric cancer chemotherapy more than 30 years ago,” he said, “and we were able to get federal funding for studies that sought to make this important connection. As a pediatric cardiologist who believes very strongly in the value of research as a contribution to patient care, publishing a definitive study of this kind in a major journal like Cancer – which doesn’t very often examine problems in pediatric cancer – is quite encouraging.

While chemotherapy has been very effective at reducing the suffering and death caused by certain forms of childhood cancer, Dr. Lipshultz said, “the downside in some forms of anthracycline therapy is that their toxic effects can sometimes damage the hearts of the children who receive them, causing major cardiac problems later in life. The publication of this study is an important step on the road to reducing those effects – and thus better protecting the hearts of many of our patients.”

Filed under: Healthcare, News
Share Tweet Pin G Plus Email
previous article: Politics: For the People, By the People
next article: Tips for Supplemental Medicare Insurance