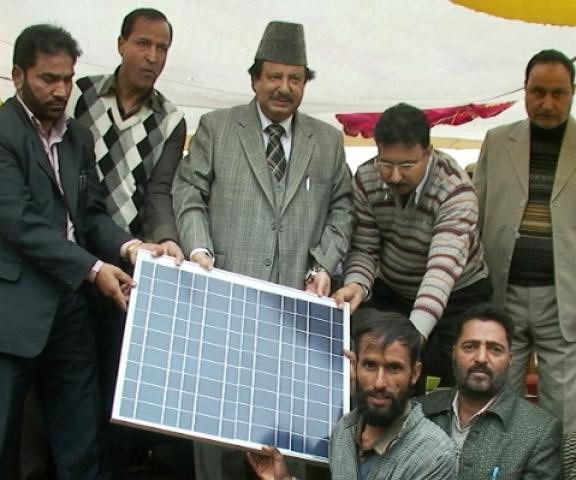 , October 22 (Scoop News) –    Education Minister Peerzada Mohammad Sayeed on Saturday said that Government is committed to provide equal opportunities of development to all the three regions of the State. He said government has taken numerous steps for the welfare and betterment of the people of the State especially for the weaker sections of the people living in far flung and remote areas adding that several centrally sponsored schemes have been introduced with a aim to improve the living standard of the people.

The Minister was addressing at a large public gathering at Koker Nag in Brang Constituency today.

He said at present construction work on several major and minor projects under various sectors are apace but needs to be monitored and people are the real source. He appealed the people to come forward and take benefits of people friendly schemes launched by the State and Centre governments.

The Minister said that education being the basic ingredient of social change which has been given added attention to provide facilities of education to the students of short distances.

Referring to the achievements registered under education sector, the Minister said that State is forward in achieving the literacy rate adding that government is trying to achieve 100 percent literacy rate in the State. In this pursuit, several centrally sponsored schemes included SSA, RMSA have been launched to provide education to the students at their door steps.

Earlier, the Minister attended a function organized by the J&K Energy Development Agency (JKEDA), in which he distributed 4494 Solar Home Lighting Systems among 4494 beneficiaries of far-flung areas of Brang constituency at Kokernag.

Speaking on the occasion, the Minister appealed the people to come forward and take full advantage of welfare programmes for their betterment. He asked the officers of JKEDA to gear up the field functionaries and survey the Brang Constituency for identification of more and more such beneficiaries to be provided Solar Home Lights. He also asked them to ensure habitation wise.