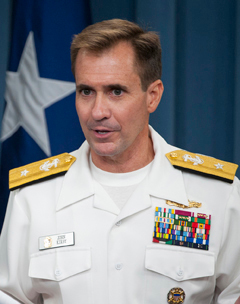 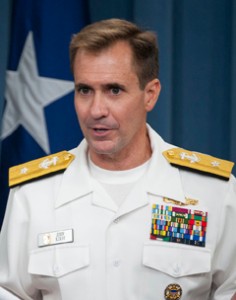 The announcement of Rear Admiral Kirby appointment as Pentagon’s press secretary has disappointed some who already have a devil of a time  dealing with the press office already – because they are considered “non approved” media sources who refuse to sign contracts with the military not to report on certain issues, including those dealing with allegations of fraud , waste abuse, criminality and war crimes.

Secretary of Defense Chuck Hagel announced that Rear Adm. John Kirby will serve as the Pentagon’s new press secretary and his principal spokesman.

The news of his appointment has disappointed some who already have great difficulties reporting on issues relating to the Pentagon and the U.S. military  – which often refuses to discuss issues, comment or make themselves available to “non approved media sources.” Meaning those who otherwise refuse to sign contracts and non disclosure agreements which preclude them from reporting on certain issues, including those which are considered embarrassing to the U.S. military.

In many cases the Pentagon press office also has this annoying habit of not returning phone calls or responding to emails as well, which is very frustrating in certain situations, especially with those reporters and citizen journalists trying to meet deadlines.

Usually non approved media sources must rely solely on the information contained in the “press releases” and transcripts itself – in this way they control what is disclosed and how news is packaged for the public.

You can also forget such things as being grated interviews, if your not affiliated with one of the major corporate owned, entertainment based news outlets…

According to the release:

“Rear Adm. (lower half) Kirby, who currently serves as the U.S. Navy’s chief of information, has long been a trusted voice for the Department of Defense and is one of its leading public affairs officers.  He previously served as one of DoD’s top spokesmen under Secretary of Defense Leon Panetta and as chief spokesman and public affairs advisor to Adm. Mike Mullen throughout his tenure as chairman of the Joint Chiefs of Staff”, according to the official press release.

According to his official biography:

“Rear Adm. Kirby grew up in St. Petersburg, Fla. He is a 1985 graduate of the University of South Florida in Tampa, Fla., where he received a Bachelor of Science degree in History. He currently holds a Master of Science degree in International Relations from Troy State University and a Master of Arts in National Security and Strategic Studies from the Naval War College.

He was commissioned in September 1986 after completing Officer Candidate School at Newport, R.I.

“Currently serving as the U.S. Navy’s chief of information, Kirby is the principal spokesman for the Department of the Navy and provides strategic communication counsel to the secretary of the Navy and the chief of naval operations. He leads the Navy’s public affairs community consisting of more than 2,700 active and reserve officer, enlisted and civilian communication professionals.

Kirby qualified as a surface warfare officer aboard the guided-missile frigate USS Aubrey Fitch (FFG 34). As a public affairs officer, Kirby served at sea aboard the aircraft carrier USS Forrestal (CV 59) and on the staff of the Commander, U.S. 2nd Fleet, embarked aboard the command and control ship USS Mount Whitney(LCC 20).

While ashore, Kirby completed tours as an instructor at the U.S. Naval Academy; public affairs officer with the Navy Flight Demonstration Squadron (Blue Angels); editor-in-chief of the Navy’s Flagship monthly magazine, All Hands; the staffs of the chief of naval personnel, U.S. Naval Forces Europe, chief of naval operations, and the special assistant for public affairs to the Chairman of the Joint Chiefs of Staff. His most recent assignment was serving as the deputy assistant Secretary of Defense for Media Operations.

Criticism of the Pentagon’s attempt to control media is a ongoing problem that persists today. The appointment of Rear Admiral Kirby probably won’t change that very much.