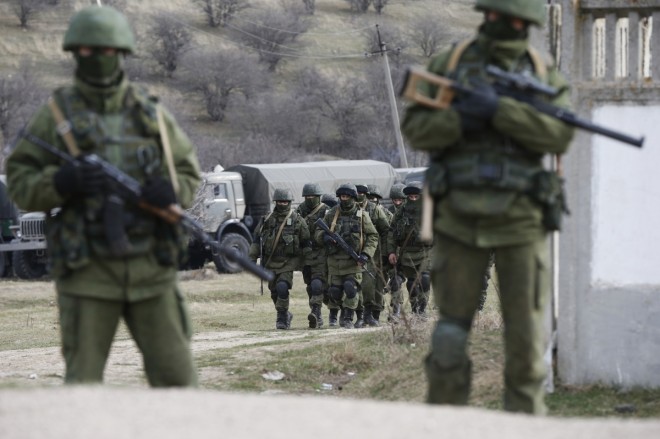 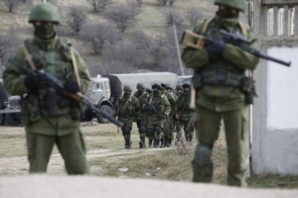 Russian troops swarm near  location of a Ukrainian military site in Crimea.

During a Pentagon Press conference with reporters on March 20, 2014 Rear Admiral John Kirby answered the following question with regard to the number of Russia troops on the ground in Crimea:

“REAR ADM. KIRBY:  Sure.  They didn’t get into specific numbers.  And as to the numbers themselves, I’d direct you to the Russian Ministry of Defense.  They should be able to account for the troops they have, and particularly because they’re exercises.  So clearly thousands, but I’m not prepared to give you an actual number, and I think, again, that’s a question that they should answer.

Q:  And on the issue of Ukrainian requests for assistance, is there any insight you can give us about where the Pentagon is in its decision-making on — on requests for weapons in particular?
REAR ADM. KIRBY:  Well, let’s back it up a little bit.  The Ukrainian government did submit a list for military assistance material, some we would consider, you know, lethal material and some would — you know, you’d consider non-lethal.  We’re working our way through that request right now here at the department and in the interagency.  I think it’s safe to say that right now, the focus of that review is on the non-lethal side of things, but it is very much still an active issue under consideration.  Did that answer your question?
Q:  Yes, thank you”
Source: DOD  http://www.defense.gov/
Filed under: Military, News
Share Tweet Pin G Plus Email
previous article: T20 World Cup: England vs New Zealand Live Streaming, Scorecard, Preview and Match Details – March 22, 2014
next article: Speaking openly about “anxiety disorder” is not easy