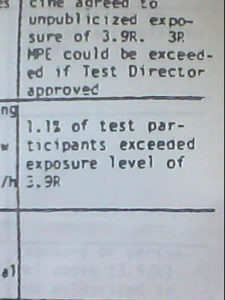 Secret information release like this one dealing with exposure to radiation in the 1980’s strictly forbidden.

In a “closed door” secret Congressional hearing on the subject of “unauthorized disclosure of classified information”, the defense department said DOD “must do more to protect sensitive information”, PentagonPress Secretary George Little said in a press briefing.

“Unauthorized disclosure of classified information jeopardizes national security”, he said. “It is a violation of department regulations, policy, and in certain cases a criminal act that should be prosecuted”, the press secretary noted.

“Reports of information security violations are sent to the undersecretary of defense for intelligence, who with the general counsel may refer matters to theDepartment of Justice for prosecution”, Little said.

“New guidelines requires that individual members of the military report potential violations up the chain of command, he said.”

“The undersecretary of defense for intelligence, in consultation with the assistant secretary for public affairs, will monitor all major, national-level media reporting for unauthorized disclosures of defense department classified information,” Little explained.

From now on all leaks of information will have to be investigated by military intelligence.

“The undersecretary of defense for intelligence will ensure that the appropriate department component has been tasked with investigating leaks and initiates the process for appropriate referrals to the Department of Justice”, he added.

Without baring military personnel from speaking to members of the press about military matters, Panetta “reiterated guidance issued by former Defense Secretary Robert M. Gates”, the press secretary said, that gave the assistant secretary for public affairs “sole release authority for all [duty officer] information to news media in Washington.”

The new mandates come at a time when the military is still trying deal with the whole Wikileaks fiasco when hundreds of thousands of secret military dispatches, incident reports and diplomatic cables were leaked to the public. They detailed such things as the payment of extortion and bribes to the Taliban not to attack U.S supply trucks to evidence of waste, mismanagement, money laundering, corruption and fraud.

“Now the military wants to go after leakers and anybody else who talks to reporters without authorization”, said one soldier at Ft. Riley, Kansas who refused to be identified.

“It sends a powerful message that soldiers in the military shouldn’t talk to members of the press, like I am doing now”, he said.

I suppose he is right.

As a reporter, the Pentagon’s new rules makes my job at getting after the facts in a military related news story only that much tougher.