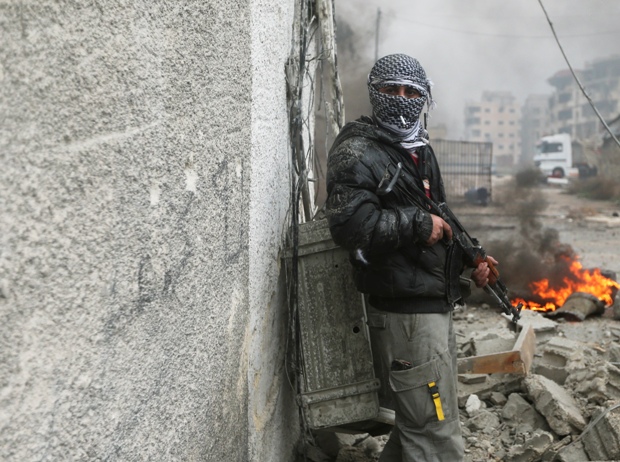 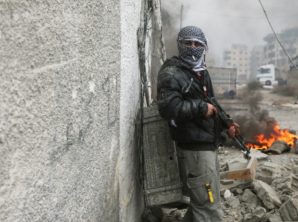 A terrorist rebel in Syria fighting for the establishment of an Islamic state. He is most probably was trained and equipped by the US military in secret camps in Jordan.

On January 16, 2015 Rear Admiral John Kirby gave a press conference where he glibly confirmed that the US is actively engaged in training rebels and Islamic terrorists for combat in Syria. The following is his statement concerning this matter:

“REAR ADMIRAL JOHN KIRBY: Good afternoon, everybody. I do not have any announcements today, so we’ll get right to questions.

Q: Admiral, can you bring us up to date on the training program for Syrian rebels in terms of when those 400 U.S. trainers would go, and which country they would go to, and the status of the vetting program?

REAR ADM. KIRBY: So basically everything.

REAR ADM. KIRBY: What I can tell you, Bob, is that General Nagata continues to work this very, very hard. I think what you can expect is several hundred U.S. troops being sent over there in a training capacity to the various sites that are still being established and prepared.

I’m hesitant to give an exact number on that because I think some of the sourcing solutions are still being worked out, but several hundred is about the right range. And they’ll be spread out accordingly, apportioned to the different sites. Again, it’ll depend on the requirements and the — and the site preparations.

I think it’s also important to note that there will be significant contributions from partner nations in this as well.

Now, I can’t give you an exact number there. Each country’s going to have to speak for that themselves. But in addition to some countries hosting the training, which again, we’re grateful for, we expect that there will be countries that will also contribute trainers to this effort and — and to complement ours. So, it’s not just going to be a U.S. effort.

There will also be, in addition to, you know, back to the U.S. side, in addition to the several hundred trainers that we think we’ll need to provide to this effort, I think you can expect to see there’ll be additional U.S. servicemembers going in a support capacity, and what we traditionally call enablers, that kind of thing.”