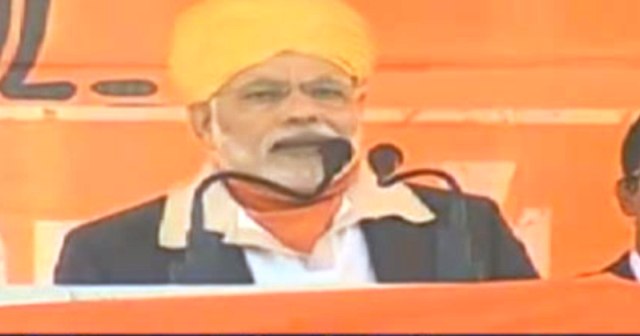 Samba, December 08, (Scoop News)- Prime Minister Narendra Modi today said that people of Jammu and Kashmie have rejected the bullet by showing the strength of the ballot.

Narendra Modi on Monday while addressing his maiden election rally in Samba(Jammu) congratulated people of J&K over voter turnout, says it has sent a strong message. He said ,”People of J&K showed that finger on EVM is stronger than finger on AK-47.” J&K has showed the way for democracy, many turned up for voting despite attacks,said Modi

He said that, J&K has showed the way for democracy, many turned up for voting despite attacks.
Modi asked people to elect a strong, stable government, not a hung Assembly in J&K.
He said If you want all round progress then vote for BJP ,give my party an absolute majority to fulfil your dreams.
Modi assured that it is nation’s responsibility to resettle all those displaced from Jammu and Kashmir

Prime Minister Narendra Modi, who is scheduled to address his maiden election rally in Srinagar today, will visit the army’s Badami Bagh headquarters also to pay tributes to the soldiers killed in deadly militant attack in Uri on Friday.

“The Prime Minister, before addressing the election rally here, will visit the local army headquarters to pay tributes to the soldiers who laid down their lives while repulsing the militant attack in Uri,” a state BJP leader said.
MORE AT http://scoopnews.in/det.aspx?q=43055