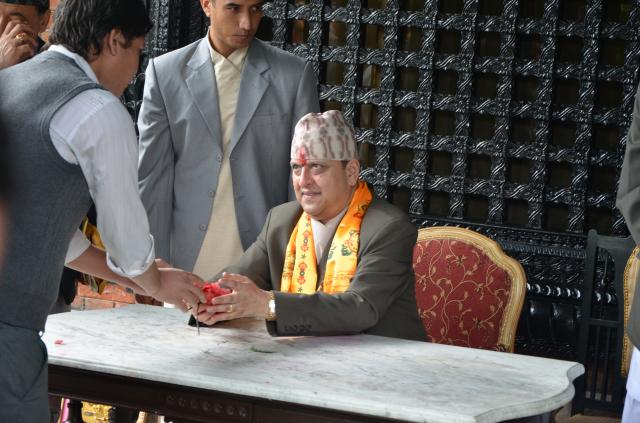 7 July 7, 2011 Kathmandu, Nepal: The Ex-King of Nepal Gynandra Bir Bikram Shaha Dev celebrated his 65th birthday here in his abode in Nirmal Niwas Kathmandu. From early morning Thousands of people came all over from Nepal to greet their ex-king happy birthday. The area around Nirmal Niwas was seen tight with security where the local public were seen shouting slogans in support of royalty in Nepal.

Talking to the press Ex-king Gynandra said, “I left the throne respecting people’s aspirations and it has been 3 years and looking at current situation of chaos certainly concerns me. The expectations of people have not been fulfilled and have prolonged the country in a deadlock situation where the country is in a state of shock. This country was served by our ancestor in the rightful way of believing people’s will and mandate and addressing that I left the throne.Slashing a satire to the political parties he claimed the national politics has failed to make headway and further stated that it has frozen in time and has even worsen than three years back.  We should be optimistic but reality is something that checks and balances everything thing, which needs to be understood and worked on."

He expressed his discontentment over the current situation of lack of political understanding and expressed his concern over the future of Nepal. In his words he slashed the claims of restoring peace, security and a stable country as the so called pro-democratic forces had promised.

The people of Nepal have been waiting for their constitution from the past there years where more than 15 billion rupees have been invested and due to lack of political understanding has obliterated the situation.