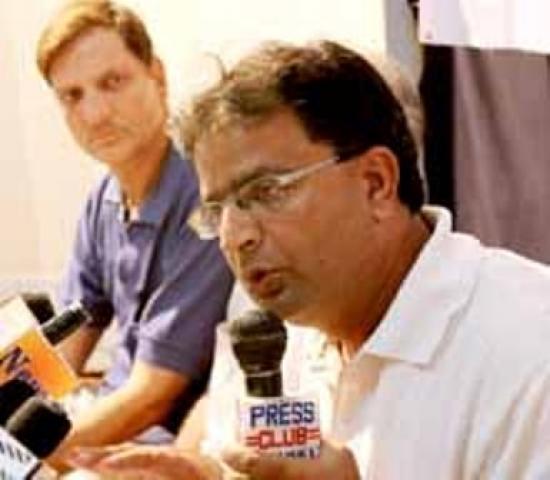 , April 19 (Scoop News) –    Declaration adopted by Prominent Kashmiri Hindus released to media at a press conference addressed by them today at . The press conference was organised by Panun Kashmir.

Kashmiri Pandit leaders said that in an emergency meeting of the prominent citizens of the Valley representing all the districts of the Valley and various socio-religious organizations of the Kashmir displaced Hindus on 18th April 2012, held at Panun Kashmir Office adopted the following declaration to voice unanimously their condemnation of the meeting held by some self-proclaimed representatives of the displaced Kashmiri Hindu Community.

The declaration reads that all of us have gathered here to convey in veiy strong and unambiguous terms our condemnation of the act of a group of Kashmiri Hindus having met Hurriyat Leaders in valley recently. The group has brought shame to the entire community of Kashmiri Hindus. Their meeting with Hurriyat leaders has insulted the sacrifice of all those who have died at the hands of terrorists while upholding the honour, dignity of their self, community, society and the country at large. This act of the self-proclaimed representatives of the displaced community has brought disrepute to the glorious History of sacrifice for the Indian social and political values upheld by Kashmiri Hindus and their immense contribution to the Indian civilizational continuity.

Declaration reads that Kashmiri Hindus are convinced that the types of Geelani, Mirwaiz and others like them have pre­sided over their religious cleansing and genocide. They hold them guilty of having committed heinous crimes against humanity in general and kashmiri hindus in particular.Kashmiri Hindus consider them to be leaders of an extremely regressive movement which seeks to destroy all freedoms which human kind should enjoy universally for they are the agents of a theo-fascist movement aiming at imposing a hegemonic order on the people of Jammu and Kashmir worse than what Hitler imposed in Germany in the last century. Giving such leadership even a semblance of credibility is abhorrent to peace-loving and patriotic Kashmiri Hindus as it is to any upright peace-loving and freedom-loving human being.

The  reality of the types of persons who constituted the group that met the Hurriyat leaders recently is very well known to the entire community. For Kashmiri Hindus they are nothing more than self-seeking bounty hunters who are ready to work for anybody and everybody be it government agen­cies or the separatist network. The said meeting, we apprehend, seems to have taken place at the behest of subversive circuits operating in whose objectives are similar to those of the circuits operated by Dr. Fai in . Kashmiri Hindus have no doubt that the activities of persons like Sushoba Bharve in have only complemented the communal secessionist move­ment in the state.

The Kashmiri Hindus who met the Hurriyat leaders recently have abdicated their right to be recog­nized as a part of the displaced Hindu community in particular and patriotic Indians in general. We disown them and their activities. We want to state unambiguously that they don’t belong to us and they represent only themselves or their masters at whose behest they work.

Filed under: Politics, World
Share Tweet Pin G Plus Email
previous article: How do you see money and sex in a relationship?
next article: PDP has played historical role in restoring peace : Mufti