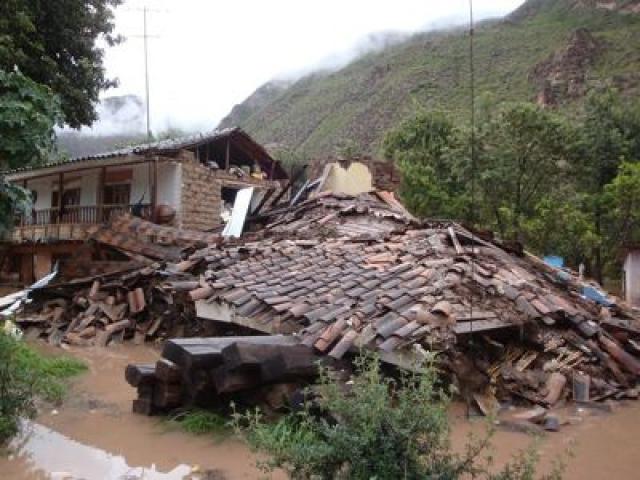 On Tuesday January 26, after a rainy week and after three days of non-stop rainfall, the region of Cusco, Peru has been declared in a state of emergency for 60 days, in order to speed up the clean-up efforts and to help the thousands of people (local residents and tourists) that have been affected by the floods and mudslides. Photo by Carlos José Rey of Living in Peru and used with permission.

While it is still too early for a formal estimate of the general amount of the damages, reports state that more than 40 mudslides have not only blocked many roads in Cusco and destroyed more than 9,000 hectares of land and crops, houses and infrastructure, but also caused three deaths. In addition, almost 2,000 stranded tourists, who are currently arebeing evacuated in Army helicopters.

Local twitterers were especially active reporting the latest events in the disaster areas, and posting photos and videos almost in real time since early morning. Some of the most active twitters were Marco A. Moscoso @Markopunk, and @Apu_Rimak, both of whom are from the area and have been tweeting all day, like these ones:From user @markopunk:

The primary bridge in Pisac has collapsed. The bridge is inclined. Crops and houses have been flooded.

Izcuchaca, flooding in housing and the hospital. Two injured for the collapse of housing.

Cusco site communicates that in Saylla, two light posts have fallen and are obstructing the pumping of water.

From the regional government in Cusco, the region has been declared in a state of emergency

Bloggers have also been posting about the events. Derik of the blog Crío de la Niebla [es] posts two videos and says:

Even though we are in the rainy season, what is happening goes beyond what is normal. Today, the media said that the government declared a state of emergency in the departments of Apurímac and Cuxco.

Once again, it is important to act, and at the same time, reflect on whether or not we are prepared or in the process of preparing ourselves, at least, for a catastrophe that can occur at any moment.

The videos published were filmed by YouTube user Multimediantonio, who describes the videos as “what no one reported. Part 2 can be found here.

The Huacarpay District in Cusco literally “disappeared from the map.” The entire district remained flooded because of the lake and the river. There are thousands of affected, the people are sleeping in the mountains unprotected.

The President has stated, that there were failures in the prevention of those disasters. Well, it is time to stop having failures, because they are costly. Once again, the policy of reaction is shown to be insufficient. We cannot avoid that more natural disasters affect Peru, but we can avoid that they become so large.

Important sources of news in English can be found at the site Living in Peru, Stu en Perú, and KnK Explore. These same sites are also regularly twittering the information, @livinginperu, @stuenperu, and @jkwak.

The media has also provided special coverage pages about the disaster, such as the information from the newspapers El Comercio [es] and La República [es]. They are providing information not only about the mudslides in Cusco, but also in the departments of Apurímac and Puno. The rescue efforts have been concentrated on the stranded tourists in Machu Picchu and the Sacred Valley, and it is expected that rescue activities will reach local residents affected and isolated.

With the news, many are wondering about the contingency plans for emergencies. The country has also suffered through the phenomenon of El Niño in which many things have been left unfixed. There are still retaining walls to be rebuilt, slopes to reforest, and cases to relocate. However, with the arrival of these heavy rains, many people wonder whether it is possible to take preventative mesaures so that the consequences are not so serious.