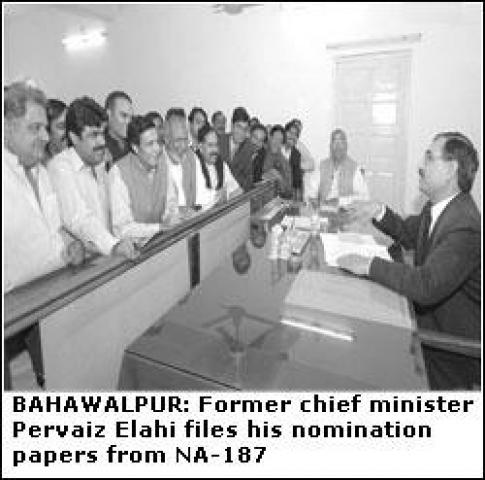 At Gujrat, Mr Elahi and his son Moonis Elahi filed their nominations with returning officer Ghulam Rasool for PP-110. Tight security arrangements had been made in and around the compound of the district and sessions court on this occasion. Supporters in large numbers also accompanied him. Pervaiz Elahi has consistently been winning election from this constituency since 1985.

Sources said Mr Elahi might later on withdraw from PP-110 as he would also contest from two other provincial assembly constituencies of Mandi Bahauddin (PP-118) and Tala Gang, Chakwal district and Moonis Elahi might replace him. However, the Chaudhrys consider PP-110 as their `safest’ constituency. PML president Shujaat Husain and his brother Wajahat Husain will submit their candidature for NA-105 and NA-104, respectively on Monday (today) whereas PPP candidate Chaudhry Ahmed Mukhtar will file his papers for NA-105 and PP-111 on Monday.

At Bahawalpur, the former CM filed papers for NA-187 (Yazman tehsil). Talking to newsmen, he said the PML would sweep national and provincial assemblies seats.

Ex-federal minister of state for health Mohtarma Shehnaz Sheikh filed her nomination papers as the covering candidate from this constituency. Along with Pervaiz Elahi, ex-MPAs Dr Muhammad Afzal and Shoaib Karim submitted their candidature for PP-275 and PP-276, (Yazman) respectively.

The ex-CM told reporters that his party was proud of its unique performance as the PML government completed tremendous uplift projects in the province.

To a question about Nawaz-Musharraf deal, he said all details would come to light with the passage of time.

On this occasion, PML workers holding placards demonstrated against the top leadership for ignoring them in the award of party tickets. Mr Elahi assured them to do justice but the workers continued sloganeering till the PML provincial chief boarded his car.

Earlier, Mr Elahi flew over to Chishtian, where he filed his nomination papers for PP-282. Tahir Cheema, brother of district nazim Tariq Cheema submitted his candidature for NA-190 (Chishtian) along with the ex-CM.