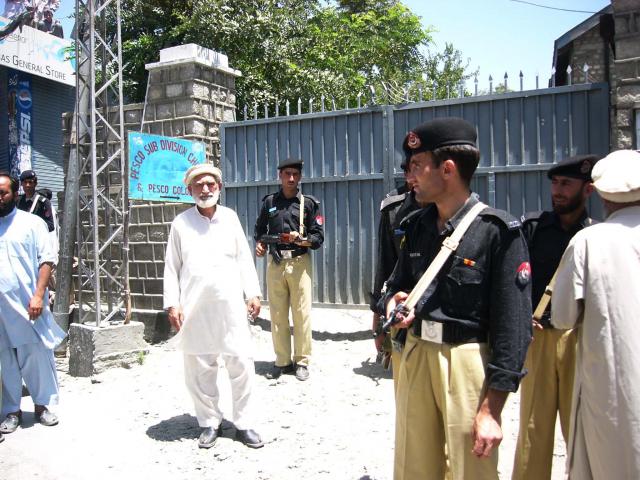 Anger Protesters set in front of Wapda office, blocked all roads for traffic for hours.

CHITRAL: Hundred of anger protesters came in a procession and protested against the longest load shedding of power supply by wapda for  more than 16 hours continue break down. The anger protesters blocked all roads leading to Mastuj, Garamchishma, Booni, Shundoor, Air port etc by putting heavy stones in the middle of roads. They were chanted slogans against wapda, elected representatives of Chitral, District Nazim and district government. They strongly lamented the so call inauguration of electricity supply from Reshun power house by SHYDO to Pesco Chitral which was blocked on the same day. They also chanted slogans against MNA, MPA and District Nazim of Chitral who politicized the power supply and want to gain credits but on the other hand poor peole are crushing by their internal tussles. The anger protesters were demanding for installation of new machineries in local hydro power station to increase power supply from 1 mega watt to 6 mega watt which is feasible and possible easily. While the Pesco staff disclosed that SHYDO (Reshun power house) having only 400 KV spare electricity but they cheated by wrong statement that they have 1.5 mega watt spare electricity. The Pesco official said that there is acute shortage of power and it should to be augmented by up-gradation of local power houses by installing new generators for generating of power.

. Later on the district coordination officer Chitral Mutasim Billah, District Police officer Sher Akbar Khan and other  came for debates with anger protesters who tried to persuade and conveyance the anger porters by ending their protest but they refused to do such. The local police later started button charging (beating with sticks) the protesters and fired tear gas shell  on them to disperse as a reflect the anger protesters also thrown stones on police party. Hence police arrested some people and they were shifted to local police station, police successes to disperse  the set in protest and opened all roads by removing the stones. Hence no casualty was reported in this longest protest.