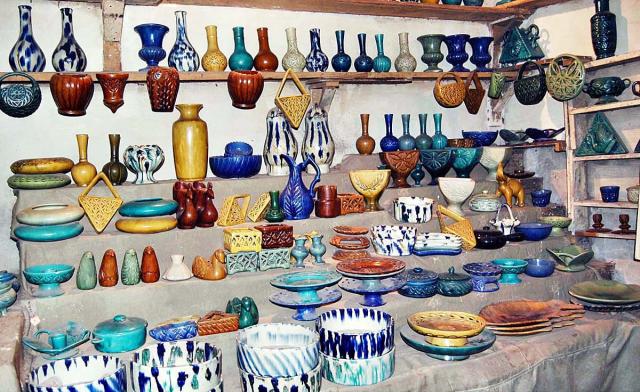 , March 31 : Peshawar Pottery, an old and unique art of making ornamental and utilitarian earthen goods by using special white clay mixed with grinded glass, is on the brink of extinction in the city once known in the region as `The City of Artisans’.

"We have been associated with this art for the last 150 years since 1860 but now it seems that the skill may end with my death," said 85 years old Abdur Rauf Seemab, a veteran leaguer while sitting in his pottery shop in a narrow alley at Shah Wali Qatal area in the interior Peshawar.

The art of Peshawar Pottery is unique from ordinary clay pot making because the material used in it is special white clay brought from Miawali and mixed with grinded glass which make the artifact much durable, Rauf Seemab informed.

The product is than glazed in strong earthen colors which give the artifact attractive shining, he added.

Pottery made of white clay and baked after glazing was of finer quality and had more shine as compared to pottery made of brown clay, he explained.

Similarly, he continued, the artisans working at Peshawar Pottery Works had the distinction of doing engraving on the pots after the moulding process which made it unique and beautiful.

Nowhere in , hand engraving is done on clay pots, claimed the octogenarian Peshawarite.

Rauf Seemab also showed two flower pots, beautifully colored, at his shop which he claimed were prepared by his ancestors without using any mould and the artifacts are more than 85 years old.

Since my childhood I am watching these flower pots in my shop and its mean that these are older then me, he guessed.

Referring to two other flower pots having beautiful engraving of web on them, Seemab said the management of lone five start hotel in wanted to purchase the product at a very attractive price, but he refused the sale of artifact.

He informed that his grandfather, Khalifa Mehmood had learnt about the art of pottery with engraving from an Iranian who migrated to . Later he adopted it as a profession by hiring the Iranian and the skill passed on from generation to generation.

As a token of appreciation for his good pottery work, Lady Wellington, wife of then viceroy of pre-partition , Sir Wellington presented a walking stick to my father, Khalifa Daud, he disclosed.

The Tourists Information Catalogue prepared by Tourism department for tourists visiting also mentioned products of Peshawar Pottery as a source of attraction for them, Seemab added.

He said before initiation of Afghan war, his business was booming and about 40 to 45 skilled workers were working with him. He had set up a cottage industry of pottery having two small furnaces.

We were unable to cope with the demand of pottery pots and earning handsome earnings because the foreigners paid reasonable price for handicrafts.

However, with the initiation of Afghan war in 1980s, the pottery business started declining as visits of foreigners started reducing to . As the Afghan war lingered on and the law and order situation deteriorated in NWFP, more and more slump was

witnessed in the business, he informed.

Due to persistent decrease in sale, we started to lay off labours because of our inability to pay them salaries.

Presently, he said, he has demolished his pottery factory and constructed a market to earn a living.

To a question, Rauf Seemab expressed his willingness to cooperate in reviving the dying art, if government extend him support, but hastened on to add that it will take four to five years to train the labour working with him. He said ordinary clay potters can

not produce the products prepared by craftsmen working at pottery and would be trained.

" pottery was introduced to visiting tourists as `Pride of Peshawar’ because of its enchanting beauty, unique art and standard with which its was prepared," remarked Zahoor Durrani, prominent tourists guide and MD of Sehrai Travel and .

The standard of crockery made at Peshawar Pottery was equivalent to standard of pots made in , he added.

Zahoor Durrani said Peshawar Pottery was earlier mentioned in Tourists Guide, but now has been removed because the products are not prepared. He lamented that different skills of are becoming extinct with the passage of time.

Durrani suggested the government to take measures for preservation of arts of by introducing public-private partnership scheme wherein the artisans are supported by the government for continuing their art.

Rumina Shahid, a student of Fine Arts Department Peshawar university, who did thesis on Peshawar Pottery in 1991 observed in her research paper that the craftsmanship of pottery is dying due to financial constraints and rising prices.

The thesis of Rumina concluded with the note that ‘pottery craft requires due attention from government as well as private agencies for its present protection and further enhancement as it carries rich heritage, glorious history and undying craftsmanship’.

NWFP Minister for Culture and Tourism, Syed Aaqil Ali Shah when contacted for comments observed that change in lifestyle of people has affected different skills of .

He also mentioned increasing price of different commodities as reason behind diminishing aesthetic sense of people which compelled artisans to change their profession.

Provincial Minister also informed that there was no Culture Directorate in NWFP till now. But, he added, he has issued directives for setting up of a Culture Directorate which will monitor all the skills and other sources of attraction for tourists and take measures for their protection.

He expressed the hope that the Culture Directorate will take measures for saving the pottery from extinction.