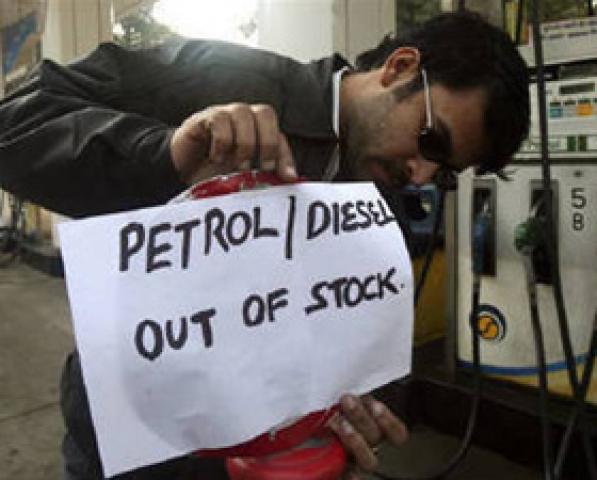 New Delhi, Jan 09: The country headed for a severe oil crunch on Friday as the talks between the government and striking oil PSUs failed late on Thursday night over the officers’ insistence on getting an immediate hike in their wages. The agitation entered the third day on Friday causing a major disruption in supply of petrol across the country.

A large number of petrol pumps across the country went dry as the indefinite strike by oil PSU executives entered the third day today, with possibility of a major fuel supply crisis looming large.

About two-third of the 425 petrol pumps in Delhi did not open because of lack of stocks. Worryingly, the head of the Federation of All India Petroleum Traders today said that the petrol stock in the Capital will be over by Friday evening.

There are 413 petrol pumps in Delhi and of these 250 had run out of fuel by late Thursday night, according to Ashok Badhwar, president of the federation.

"Almost 60 to 70 percent stock of petrol in fuelling stations across the country has dried up. In Delhi the petrol stock will be over by Friday evening," Badhwar said.

Similarly, while 60 percent outlets in Mumbai hung ‘No Stock’ signs boards, 30 percent of Kolkata’s 350 petrol pumps are out of stock and in Chandigarh 80 percent petrol pumps have dried up. However, officials said that Delhi had enough CNG and piped natural gas stocks to last 7 to 10 days.

"We have had some discussions but we are yet to reach a conclusion. We will continue to have discussions", Indian Oil Corporation chairman Sarthak Behuria said after Petroleum Minister Murli Deora held a two-hour meeting with the striking officers that ended at Noida an hour after midnight.

While Hindustan Petroleum pumps across the country were operating normally, Bharat Petroleum senior management officials were ensuring that there were dispatches of petrol and diesel to the company’s outlets. However, Indian Oil, the nation’s largest retailer, had almost nil dispatches of products.

Officials said the striking executives pressed for an immediate hike in their wages as an interim step before a final settlement is arrived at.

President of Oil Sector Officers’ Association Amit Kumar said "the talks are inconclusive and our action is on".

He said Deora "has assured us that he will take up the issues raised by us with the Prime Minister again" and the talks would continue.

OSOA kept harping on government conceding on its demand for higher increase in their wages than those approved in November but Deora said he did not have powers to approve anything that would also have ramifications on other PSUs.

Many leaders of the agitating workers went underground fearing arrests under the Essential Services Maintenance Act (ESMA), which many state governments invoked to tackle the employees’ strike which the Delhi High Court has ruled illegal.

The oil sector officers’ association, an umbrella organisation of 45,000 employees in the public oil sector companies, called for an indefinite strike from Wednesday to force the government to give them wage hikes.

But consumers have already started feeling the impact. A large number of petrol vends ran out of stocks after they did not get replenishments of petroleum products.

Prime Minister Manmohan Singh has already appointed a committee of ministers headed by Home Minister P Chidambaram to look into their demands within 30 days.

At the airports, absence of officers led to delay in refuelling of airplanes and some flight were delayed.

Crude oil production from Mumbai offshore was almost half at 1,80,000 barrels and four key refineries of Indian Oil operated at 25 to 30 per cent of their capacity.