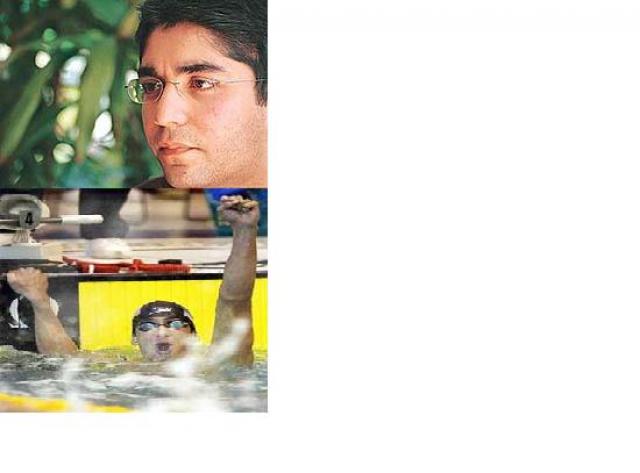 The usually cool Phelps screamed and pumped the air with joy as his U.S. team mates helped maintain his charge for an unprecedented eight golds in the pool, pipping France in the 4×100 meters freestyle relay.

Indians banged drums and danced in the streets after the world’s second most populous nation won their first individual Olympic title with Abhinav Bindra’s gold in the men’s 10m air rifle.

"Now I have lots of work ahead as he is the country’s most eligible bachelor," joked his mother Babli Bindra, speaking to Reuters from the family home in Chandigarh.

Like many winners in Beijing on Monday, Bindra needed a remarkable comeback, shooting a near perfect hit at the end.

"It’s the thrill of my life," he said after a win that left China’s defending champion Zhu Qinan sobbing with only silver.

A familiar shadow fell over the Games when a Spanish cyclist became the first competitor to fail a drugs test in China.

The IOC tested the entire Spanish cycling team three times before competition began, getting tough after a series of past scandals have marred the reputation of the sport and country.

"It’s time that Spanish authorities start to do some concretely," the president of the International Cycling Union, Pat McQuaid, told Reuters. "For years they have not been tough enough on doping and this is the result of their leniency."

Phelps is counting off the golds in world records as he bids to surpass Mark Spitz’s record of seven golds in 1972.

Again watched by U.S. President George Bush in the Water Cube, he left the Americans second after the first leg, trailing to a French team who had vowed to "smash" them.

With just a lap to go, France’s former record holder Alain Bernard led by half a body length, but an astonishing comeback from Jason Lezak took the gold by a finger-tip.

"Jason finished that race better than we could even ask for," Phelps said. "I was so fired up."

The Americans took nearly four seconds off the world record, a big margin in swimming. In all, five relay teams beat it, while Eamon Sullivan claimed the individual world record from Bernard when he led the Australian team off on the first lap.