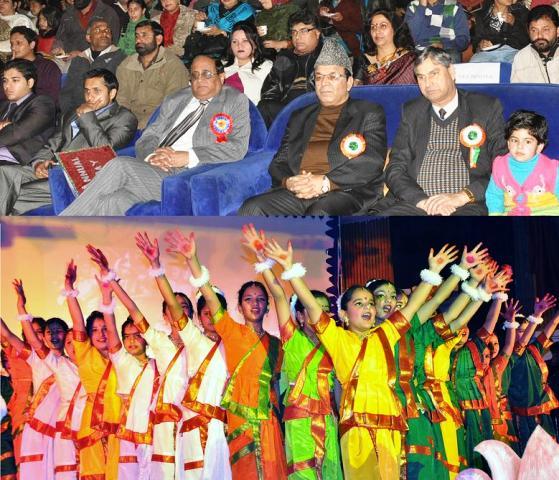 Jammu,January 30 (Scoop News) – -Maintaining that the knowledge was imperative for enlighting of the social set up, the Minister for Finance and Ladakh Affairs,  A.R.Rather today called upon the philanthropists to invest in education sector as their contribution in building a just society free from prejudice, violence and hatred.

"Philanthropists have an onerous duty to invest in the education sector, without caring for profit and loss, to supplement the government efforts to develop an evil free society",  Rather said while speaking at the annual day function of JK Public School, Kunjwani near here this evening. He said spending in education in real terms would be an investment for the future of the State and the country as a whole.

Rather also underscored the importance of private sector in education, adding that private schools have done a commendable job in raising the standard of education in the State and polishing the talent of budding children. He said private sector has a much bigger role in spreading the light of knowledge and grooming the youth to meet the stiff and challenging competition in the job market. He also called upon the teaching community for extra dedication to create new benchmarks in the education arena adding that teaching is a noble profession which transforms all round personality of children to make them responsible citizens of the society and nation builders. "Teaching profession needs due recognition, respect and honour, adding that teachers too have to strive for regaining and restoring the most respectable place in the society and restoring glory of this profession”,  Rather added. The parents too have an important and basic role in shaping the future of the children by constant monitoring and evaluation of their performance in the schools.

Rather also called for providing a congenial academic atmosphere to the children as a catalyst to give vent to their potential and exposure of talent.  Rather also urged for co-curricular activities for students to make them mentally and physically fit adding that sportsmanship helps to inculcate discipline, quick decision making and presence of mind among the students.

Rather also called for imparting moral education to the students to fight social evils and menace of corruption in the society.

The Minister appreciated the management of the JK Public School for bringing steady improvements in school functioning. He also distributed medals and awards among the best performing students of the school in curricular and extra-curricular activities.

Principal of the School, Ms Anita Bhatia presented annual report of the school and highlighted the achievements of the school in academics and co-curricular activities.