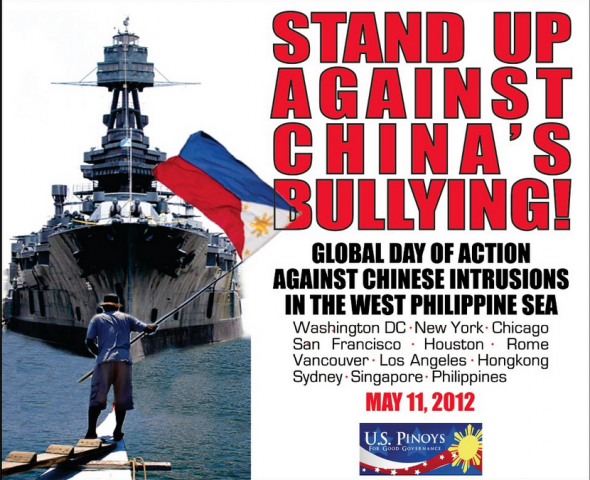 On the day of a major protest, organized by various groups in the Philippines, and to be repeated across the globe by overseas Filipino workers; albeit downplayed by government here – China’s top military leadership even its state owned media have increasingly been calling for military action versus the Philippines.

In a alarming escalation to a crisis most thought headed towards negotiations.

Today, May 11th, Filipinos in this country and millions living overseas have been called upon using mostly social media – to voice their protest over repeated and constant Chinese threats to use force vesus this former US commonwealth and one of America’s only nations, the USA built in its image.

The Philippines is the only majority Christian nation in Asia and is seen as a ‘little America’ by its neighbors. There are more American fast food outlets in Manila alone than most midwestern states.

While the Philippines, has a well trained and US equipped military. It is mostly a counter insurgency force. The bulk of its forces are primarliy dealing with Maoist and Muslim seperatist rebels. It also get US support to fight Al Qaeda and regional extermists groups that still plague peace and security in some hinterland areas.

It’s navy which was once Asia’s second largest after Japan up to the 1950’s is only now being modernized.. The Air Force is being rebuilt slowly. Manila rejected an offer of stored US F16’s due to the prohibitive costs for refurbishment. Choosing instead to spend its resources on soon to retired attack planes and Italian ships and light combat jets. "We would like to do the best we can with what little we have to defend ourselves. We cannot afford the F16’s as much as we need them under the terms offered." Defense Secretary Gazmin admits.

Manila’s military and civilian leadership are hoping assurances made by Secretary of State Hillary Clinton and US DOD Chief Leon Penneta that America will not abandon its commitment to its former commonwealth and provide as per a treaty of mutual defense the security the USA claims it offers its allies in Asia. The mutual defense treaty between the USA and its former commonwealth clearly states in article IV: “Each Party recognizes that an armed attack in the Pacific area on either of the Parties would be dangerous to its own peace and safety and declares that it would act to meet the common dangers in accordance with its constitutional processes.” Manila while not invoking the treaty at this point. Has increasingly asked Washington’s help to both mediate and protect it not with troops or ships but with the tools it needs for a basic credible defense.

While the treaty is vague on its implementation, but its wording is clear, Article V of the MDT provides that “an armed attack on either of the Parties is deemed to include an armed attack on: the metropolitan territory of either of the Parties, or on the island territories under its jurisdiction in the Pacific Ocean, and its armed forces, public vessels or aircraft in the Pacific.” Washington has made assurances in recent talks – But – most analysts noted the US officials made it clear whoever starts the fight or threatens and intimidates or impedes peaceful navigation and trade will face US resolve. A reference to China but also a call on the Philippines to defuse tensions where possible.

Manila, has never threatened nor used force versus Chinese military or maritime police units which for the first time ever have been deployed just off of the coast of Luzon Island. But, Chinese vessels have threatened, turned on targeting radar, and attempted to swamp small Philippine coast guard vessels just a short distance from Luzon. "Manila can easily sink those ships, they can even capture them, arrest their crews, China seems to be pushing closer and closer to use that as pretext for military action." warns a US official closely monitoring the situation.

"But, honestly China is playing with fire, All South East Asian nations in the regional grouping of ASEAN are monitoring the situation intently, they are watching China and the Philippines and wondering when China’s vessels will come to them next." The official also notes that while most comments from ASEAN are muted if China attacks one of weakest in militarily in Asia the backlash may be unprecedented. "We could see Singapore sending its planes and frigates, Malaysia and Indonesia also stepping in to support Manila. Brunei which is upset over China’s claims of its off-shore oil fields has already sought US and UK assistance to beef up its coastal defense systems. "Manila knows this, but is hampered by constitutional limitations to the presence of foreign troops on its soil."

ASEAN as a group is more of cooperative council, there are no terms within its charter for mutual assistance in military situations. The Philippine has good ties and over the last few years increasingly the Navies of the region have been practicing for just such a threat.

China – US issues already frayed over a trade imbalance, issues of IPR violations by Chinese firms, and, Human Rights concerns are seen as being increasingly waived by the USA in favor of much needed capital and investment to rebuild the US economy.

"We have Washington’s assurances and we hold them to their word." Manila’s defense secretary Voltiare Gazmin told reporters Monday.

The position of the country’s President is clear. "We want to bring this to international courts, and, settle this dispute," a option China refuses to consider, Earlier speaking in Filipino, the Philippine President has said in the past, in a briefing to journalists on the situation,"We have allies we have other regional security partners, we do not want a conflict or war but we will not be intimidated."