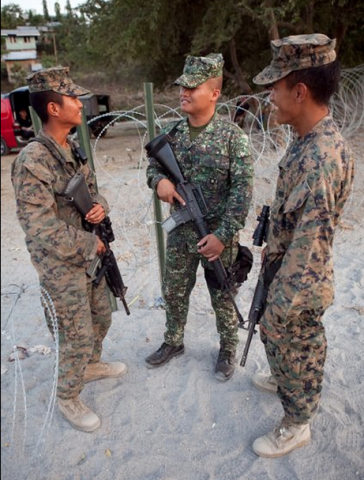 Mitt Romney’s strong words versus China have taken hold in Manila. Filipino’s on social networks have been reposting the words across social media. Romney made the remarks in Aston, Pennsylvania.

During the speech he mentioned points on China’s government actions – statements he made before as well comments on the the Obama administration’s mamanging of the US economy.

While it is typical, in Political season, to raise issues that appeal to a domestic crowd. The points raised on China coming as manila is having it’s stand-off has made it poignant for people here.

Romney’s, "The Chinese are "stealing’ …" speech is growing popular calling Romney’s tone one they would like to see from more US officials. This comes as a crisis with China heats up over rich fishing grounds of the country’s most populated island of Luzon.

"Now there’s a leader worth listening too… Obama’s just too silent." an American, living in the Philippines, told mikeinmanila.com today. Ron Merril, a US businessman who once served in the US Navy says." If you go in the embassy chancery building there’s a map on a wall there – it shows Scarborough shoals – beside PI that means – Philippine islands" Merrill says the US embassy’s silence is ‘typical of the Obama administration, they work for China. which is why we need them changed"

Merrill then laughed, and, bought a round of drinks at a small bar after the comment. "At least our Marine commander in Okinawa has a pair down there and is willing to say something." reffering to a the US Marine commander in the western pacific reiterating the Philippines is a "US treaty ally."

Merrill’s tone was echoed, by long time resident and fellow US Navy retiree Jim Green, who is married to a Filipino. Two of Mr. Greens children serve now in US Navy themselves. "The isn’t a ship in America’s navy that doesn’t have Filipino’s on ’em."

Greene points out that trouble with China in his view started when captured a US P-3 Orion while he as still on active duty. "It started then, they just keep getting bolder and bolder – next for all we know they claim Hawaii or Guam. It has to stop here and now America needs to speak up at the least at most start rearming the Philippines so they can stand up for themselves."

Joseph Evans, a businessman working with a Philippine company in call center says some of his clients have expressed worries over the reports of a crisis. "I get questions about what happens if China hits Manila. It’s not that bad – but – people worry. So far it has not affected business." Evans, who says he voted for President Obama, shakes his head when asked if he would agian. "When he was elected I had a house, a small company, a career, thoguht he’d do something to bail out small business. He didn’t, now I train people in the philippines – I like it – but talk about unexpected change."

Evans, says he wont vote in this election. "I had high hopes – so many promises. I saw them broken – hopefully Obama doesn’t break promises he made to help the Philippines too."

Merril, Green, and Evans. are some of just over 300,000 American citizens who per Philippine officals call the country home. "I live most of the year here. sometimes I go back to Chicago where I grew up, let me tell you Obama is not popular there and with most overseas Americans democrats and republicans." Merril says when he served in the Navy it was rare to hear Americans overseas critical of their government. "Now go to facebook, twitter, or, anything like that – people complaining – there’s anger. Mitt Romney may be only saying the China steals thing – but look here."

Evans pulled out what looked like an Iphone. "I bought it for like $20 my extra phone. I watch tv on it sometimes – China made it – America designed it – someone stole it." Merrill says he is worried most media outlets in the US are not reporting on the crisis. "It worries me – to be honest – America might wake up with a few less islands in the pacific too soon if China gets away with this."

Romeny’s speech did touch on the issue of intellectual property, He said China was allegedly, "Appropriating it at no cost, duplicating and selling it around the world," he added. "There’s also hacking going on, where Chinese companies or even the government itself, perhaps, hacks into computers to steal technology." The latter has become a battle cry as today the Philippine government website for its budget and management department was hacked anew.

Suspected "China-hackers" have hit numerous Philippine government sites. Starting with the National University of the Philippines. It’s leading government college. In a country where a college degree is required for even the most basic jobs attacks on the University led to counter attacks by allegedly Philippine based hackers who defaced several chinese government website.

"Mitt Romney is saying what we want to hear from our senators and president, its about time someone called the Chinese out." Red Gerardo, a filipino told mikeinmanila over a social networking website. "I can’t vote for him but I’ll sure tweet anything he says about China that we know here in the Philippines is true."