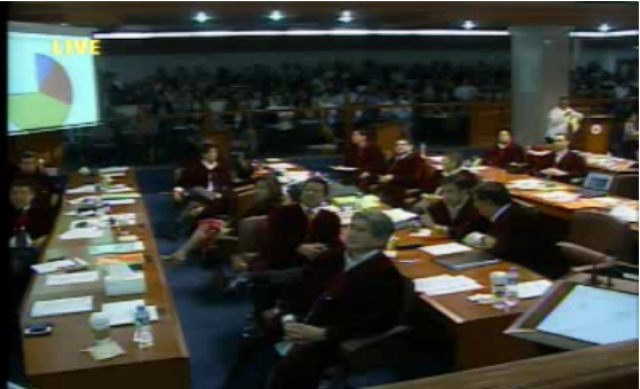 Manila – Months after the start of a Impeachment trial and just into the first week of the defense of Impeached Chief Justice Renato Corona a series of accounts presented in open public trial from a investigation of the Philippine Anti Money Laundering Council. Has produced the prosecution claims the strongest evidence so far into allegations of corruption versus the most senior judge in the Judicial branch of government.

“fresh deposits,money that never moved,” amounting to over $12 million, the Ombudsman’s technical witness COA Auditor Heidi Mendoza said a total of around 30 million flowed out from the monitored accounts and more or less 28 million were transferred into the 82 bank accounts.

Corona made “significant withdrawals” during the 2004 and 2007 elections, and the week he was impeached in the House of Representatives.

Main point of evidence applicability: impeachment court unanimously voted for the Ombudsman to show a present a report prepared by Morales and the Commission on Audit

Per the sworn testimony of the chair of the Philippine commision of audits statements over documentary evidence that some 30 million dollars were flowing out and 28 million dollars into into a series of accounts the AMLC investigation claims belong to the Chief Justice Corona.

Funds that were regualrly deposited and shifted over time from five different bank branched and funneled into small amounts and accounts.

The funds, alleged to be unexplained and undeclared, automatically were recorded by the Philippine Anti-Money Laundering Council, totaled 17 pages of documents on some 430 transactions.  "The total amount was 28 million dollars into the accounts and 30 million in withdrawals." Hiedi Mendoza of the Philippines Commision on Audit said. In a technical explanation of testimony in support of a defense wittness called by the chief justices own lawyers.

It is a little known agency of the Philippines primarily created to investigate money laundering and which looks into bank transactions on amounts over specific targets set by law.  It is the Philippine financial inteligence unit of the country’s treasury department or central bank, the agency automatically monitors transactions in local and forieng currency that hit specific amounts in funds transfers.

The Offices of the Ombudsman, a constitutional agency, was created to fight graft, independently monitors all three branches of the government. The Ombudsman is also responsible for receiving complaints from citizens and organizations from the country. The Ombudsman usually prosecutes officials accused of graft and corruption.

Under specific laws it provides for international cooperation in a global campaign versus Money Laundering is a crime under philippine law. "Whereby the proceeds of an unlawful activity as defined in the AMLA are transacted or attempted to be transacted to make them appear to have originated from legitimate sources."

The small unit which may have found the key evidence ‘unexplained funds’ was primarily tasked to track suspected graft sourced, or, illicit funds from narcotics trafficking or track and combat terrorism funds.

Under the law, anyone in the philippines who uses its banks and "Knowingly transacting or attempting to transact any monetary instrument/property which represents, involves or relates to the proceeds of an unlawful activity." the agency website says, "Penalty is 7 to 14 years imprisonment and a fine of not less than P3M but not more than twice the value of the monetary instrument/property."

The money laundering issues were found as part of the Ombudsman request to probe into allegations of secret dollar accounts of the chief justice and his family. "Knowingly performing or failing to perform an act in relation to any monetary instrument/property involving the proceeds of any unlawful activity as a result of which or facilitated the offense of money laundering." a "Penalty is 4 to 7 years imprisonment and a fine of not less than P1.5M but not more than P3M." is covered if the funds were ‘processed’ by an individual for someone else.

Another offense covered under the law is, "Knowingly failing to disclose and file with the AMLC any monetary instrument/property required to be disclosed and filed. Penalty is 6 months to 4 years imprisonment or a fine of not less than P100,000 but not more than P500,000, or both." per the briefing page on the legal penalties covered the law also covers any ‘Unlawful Activity’ which is described as any offense which generates dirty money.

Commonly called the predicate crime refers to any act or omission or series or combination thereof involving or having direct relation to the following acts: Kidnapping for ransom, Drug trafficking and related offenses, Graft and corrupt practices, Plunder, Robbery and Extortion, Jueteng and Masiao (Numbers rackets) , Piracy, Qualified theft, Swindling, Smuggling, Violations under the Electronic Commerce Act of 2000 Hijacking; destructive arson; and murder, including those perpetrated by terrorists against non-combatant persons and similar targets.

The laws also cover "Fraudulent practices and other violations under the Securities Regulation Code of 2000" and also in an effort to prevent Philippine banks form being tainted by overseas syndicates or used to launder funds. "Felonies or offenses of a similar nature that are punishable under the penal laws of other countries."