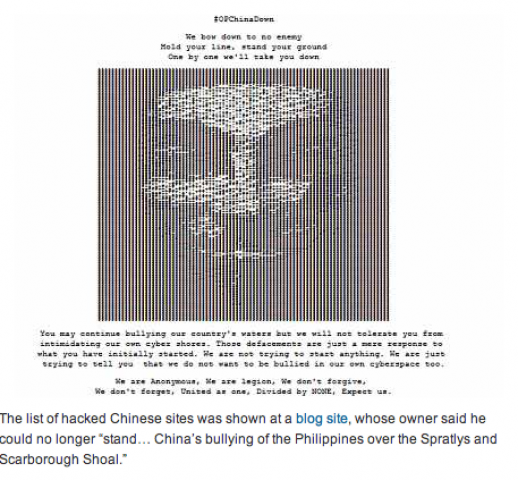 In Manila a new list of sites in China that were defaced last week came out on online over socail networks as well as others.

The list, was posted online, by a number of news sites in the Philippines. Reports claim a group which is calling themselves Anonymous Philippines, is allegedly behind the attacks.

Currently, government in the Philippines has warned local groups in the Philippine IT community. If it is proven that any are engaged in  ‘violation of the e-commence and other laws pertaining to internet security’  will be pursued if complaints are filed.

"Vigilantism, however mushy, ultranationalist, or, sympathetic can only increase tensions. .It is understandble there is anger over the situation at Bajo de Masinloc, But we must be united and not do unilateral acts which only inflames tensions." A government spokesman on radio speaking in Filipino said.

The list, has also been spread on facebook and twitter reaction has shown the defacing acts are largely popular in the online PH community.  However, there is slowly a growing concern that more tit-for-tat attacks online will happen. "This is dangerous, funny at times, but scary also." Gov’t spokesman say.

"no longer “stand… China’s bullying of the Philippines over the Spratlys and Scarborough Shoal.”

Here is the list of the defaced websites from the Newsbytes story:

The ‘Deafeced pages’ show the following once the site is opened.

We bow down to no enemy
Hold your line, stand your ground
One by one we’ll take you down
You may continue bullying our country’s waters but we will not tolerate you from intimidating our own cyber shores. Those defacements are just a mere response to what you have initially started. We are not trying to start anything. We are just trying to tell you that we do not want to be bullied in our own cyberspace too.

We are Anonymous, We are legion, We don’t forgive,
We don’t forget, United as one, Divided by NONE, Expect us.