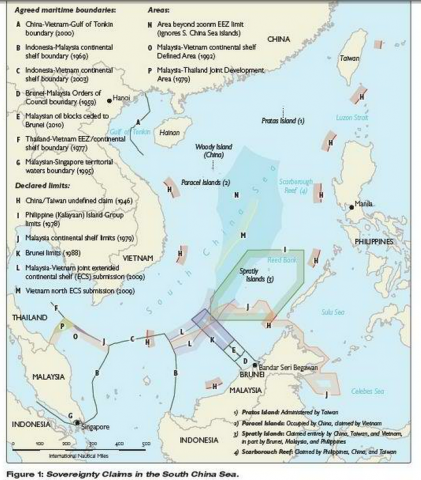 Manila – A Philipine TV news channel crew, who joined a fishing boats trip off shore to a disputed reef claimed by China.

Got a up-close and first hand taste of the new fishing ban impossed by the Chinese Ministry of Fisheries. Even if the place in question is over 800km away from the PRC coastline and yet just 90 or so kilometers off off the coast of Philippines.

Solar News TV reporter, Miguel Ortilla, in a first person account got a story long heard of all throughout South East Asia. But, rarely witnessed up close by journalists first hand. From Vietnam to Japan to now the Philippines. Chinese fisheries vessels have been blocking local fisherman from traditional areas off thier coasts.

Two other Philippine vesels, a coast guard patrol ship and a Bureau of Fisheries vessel were close by. But, the report says they "Did nothing to help the Philippine fishing boat." Which while being blocked from entering the shoal made no other threatening moves. Other than point camera’s and film the fishermen and TV crew onboard.

The filipino fishermen say it is one of the firtst times they have done this to them in the report online here:

The report claims while Chinese are blocking Philippine vessels about a dozen Chinese fishing ships are fishing – effectively claiming China’s ban is only versus Filipino’s.

Meanwhile local officails in Zamables porvince, which the shaols are known locally as the Bajo de Masinloc, say the Philippine governments moves to apease China are not working.

"They should send every fishing on the west coast of Luzon there. One massive wave of boats and show China this is ours" – a local leader says – upset over governments handling of the situation." Speaking to gorund report on a cell phone, he says the PRC patrols are an insult to all Filipino’s and will hurt the livelihood of people in his community.

He, and other local village chiefs  had planned to join a former Philipine marine officers plans to plant a flag on the reef. "We are famous for people power! show them people power at sea. bring all the international media. put shame on china for stealing what is not thiers."

The Philippine President had put a stop to the planned protest. Something locals had planned to join – but – Manila says it wants to defuse tension in the area.