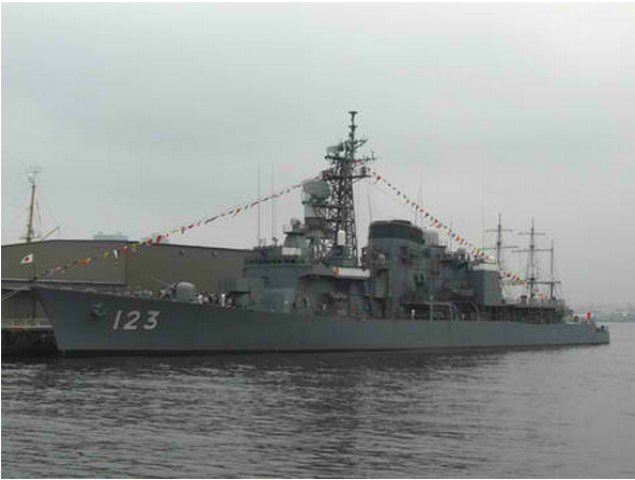 Manila –  Three Destroyers of the Japan Maritime Self-Defense Force, consisting of three vessels, The ships,with nearly 800 personel aboard, officers and crew members on board, including 200 newly commissioned officers. The visit comes as the Peoples republic of China has been fueding with Manila over a small atol off of the Philippine coast. At the same time China has also been engaged in sanctions and a dispute with Japan over islands just off Japan.

The vessels JS Kashima (TV-3508), JS Shimayuki (TV-3513) and JS Matsuyuki (DD-130) are in the Philippines until June 1 for "Goodwill activities with the Philippine Navy and socail services projects with Philippine government agencies." The squadronis lead by Rear Admiral Hidetoshi Fuchinoue.

The squadron last visited the Philippines in 2010, when it also stayed for four days. Then the JS SHIRAYUKI (DD123), JS MINEYUKI (DD124) and JS SETOYUKI (DD131), The program during the ships’ regualr almost yearly visits include courtesy calls on ranking Philippine officials and friendly sports activities with Philippine counterparts.

In this years visit, a news release from the Japanese embassy in Manila says,  The ship s have about 7 7 0 officers and crew members on board, including 200 newly commissioned officers,

During the visit, Rear Admiral Fuchinoue will make courtesy calls on ranking Philippine officials and la y a wreath at the Rizal monument.
On May 30, the Japan Maritime Self-Defense Force Band and the Philippine Coast Guard Symphonic Band will have a joint concert.

JMSDF ships have visited Manila more than 50 times since 1966, making it one of the most frequent destinations for JMSDF’s training squadron and indicat ing the strong relations between the Philippine Navy and the JMDSF.