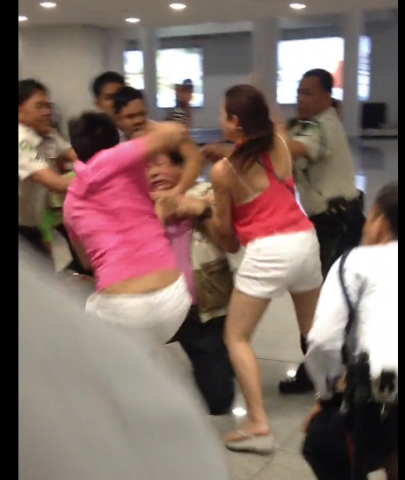 Manila: In a strongly worded statement the national union of journalists of the Philippines defended the right of columnist and broadcaster Ramon Tulfo, to take photograpghs in a public place of a irate actress screaming at airline employee’s over delayed luggage.

The National Press Club of the Philippines also expressed its desire to see assualt on Mr. Tulfo as violence versus a member of the press and expressed support for his rights as a member of media.

In an interview the NPC called for a boycott of the actor and actress and filing of propper charges versus those who took part in the mauling of Mr. Tulfo who they described as a ‘lifetime’ member.

NATIONAL UNION OF JOURNALISTS OF THE PHILIPPINES (NUJP)

On the May 6 NAIA incident: Public incidents merit coverage

The National Union of Journalists of the Philippines maintains that there was nothing wrong in columnist and broadcaster RamonTulfo taking photographs of actress Claudine Barretto giving an airline staff a dressing down at the terminal of the Ninoy Aquino International Airport (NAIA3) on May 6.

Barretto and her husband are celebrities and are thus, public figures. They were also in a public place and were involved in a commotion making the incident legitimate for coverage.

Tulfo was also right in not handing over his phone camera. No one has the right to forcibly take a person’s camera or phone especially of a journalist documenting a public incident.

The matter on who started the violence should be left to the investigation of authorities who should file the appropriate charges on those found liable.

Speaking GMA television in Manila monday night the couple said they had also filed charges versus Mr. Tulfo whom they claimed began the fight. They admited having asked Mr. tulfo to not photograpgh them.