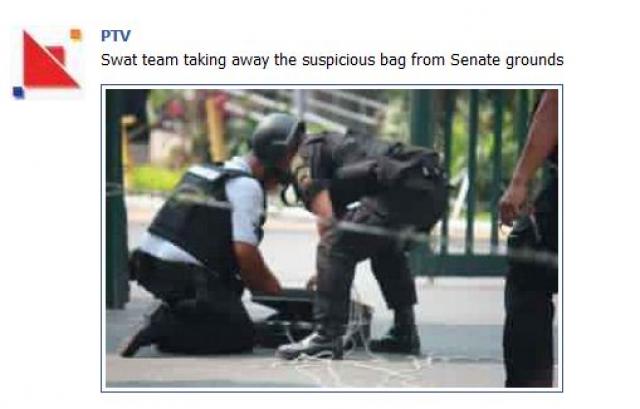 A black bag with a tripod found thursday morning near the security cordon at a entrance of the Philippine Senate was ropped off by Police and bomb sniffing dogs called in. The bag has been removed for examination..

Security is tight as the third day of hearings into a impeachment complaint takes place at the Senate,

A Philippine National Police SWAT Explosives and Ordinance Disposal team or EOD called in and the abandoned bag removed from the site.

News crews believe the bag could be items left behinf by scores of media teams covering the senate trial. However the security detail at the Philippine Senate are taking no chances.

The Senate of the Philippines is protected by a battalion of Philippine Marines highly trained in securing the facility. A second cordon of Police and Special forces commando’s are also deployed to ensure the safety of people at the site.

The Philippine legislatures lower house was on November 13, 2007 other government buildings also have been the scene of terrorist attacks.

In the 2007 bombing of the Batasan Pambansa  was treced to a political fued between political clans from the southern Philippines- the IED was made by a terrorist bomb maker who was hired to carry out the assasination.  Since that attack securty has been tightened at both houses of the Philippine congress.

The Philippines has a history of terrorist attacks and IED’s are common although not in capital of Manila. The Senate however as a institution is highly popular has never been succesfully targeted by any group including four recognized terroist organizations known to exist in the Philippines.

A security officer who spoke with mikeinmanila but not autherized to comment offically said on condition of anonimity that " All abandoned bags and packages found at the senate are scrutinized for the safety of the public.. He described the cordon and bomb sniffing dogs as routine," bit stressed the Senate security does not take anything for granted when public safety is in question.

Police removed the bag from the scene, Pholo’s from Government television PTV.ph are used with permission.