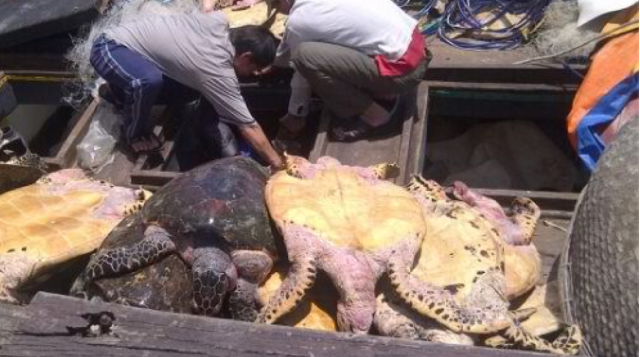 Puerto Princesa City, Palawan – It is a heartwrenching photo rare and protected sea turtles striped of thier shells.

Mitra said further,  that the turtles were " All dead!" adding  "The Vietnamese 12 of them were caught in the waters of West Balabac." clearly Philippine territory and within munincipal waters in Southern Palawan.

Philippine Navy elements of the Naval Forces Western Philippines under the Western Command sent a small Corvette to the area on a patrol after reports of illegal fishing in the area.

Vietnamese vessels increasingly have entered Palawan munincipal waters as well as those of Indonesia and Malaysia after being chased away by Chinese patrol vessels off of traditional fishing grounds off the coast of Vietnam. "

This is China’s fault also – they keep chasing and harrasing fishermen from vietnam, indonesia, and the Philippines away from our fishing areas. " a vietnamese fisherman on the vessel told investigators they were pursued by a China maritime patrol vessel and ended up in the Philippine waters. "This is allowe by our laws with a permit." the vietanamese fisherman said. "But you are not in vietnam – you already are deep inside Philippine territory." noting the men were caught within 12kms and in sight of shore which is considered by international law munincipal waters the investigator told mikeinmanila.com in a interview.

Earlier this week Chinese patrol vessels prevented the Philippine navy from protecting corals reefs and protected sharks from Chinese fishing vessels illegally destroying a coral reef off of the Island of Luzon.

"We are trying to protect the seas – they come to destroy. We are defending nature – they want to destroy our reefs because they already did this off thier waters. This is illegal under a UN treaty and also under CITIES protection of wildlife laws." a local Police investigator told MikeinManila in a text message.

Increaisngly though the Philippine is dealing with a dual threat of fishermen who while inside their own countries territory may be allowed to hunt turtles – are now forced into Philippine waters because of Chinese patrols.

"After being escorted to Puerto Princesa City and turned over to the local Police for processing, the Navy boats will be going back to catch more of these Poachers. " Mitra said on his facebook page. "Their shells more valuable than the meat of thier bodies to made into jewelry or accents." a local Bureau of Fisheries and Aquatic resources officer told mikeinmanila.com adding that they increasingly are dealing a large volume of cases.


DFA interference: Palawan officials blame DFA for release of fishermen in the past

Palawan officails say that illegal and destructive fishing often repeated because the Philippine Department of Foreign affiars interferes and releases poachers to appease Vietnam and China.

"Diplomats or doormats? sometime I wonder who these officails work for they seem more concerned for the feelings of China or Vietnam than our laws." Local environemtal actvist group Palawan Conservation Socieity said.

In over 20 years of reporting on this issue this writer has personally seen a large number of cases are settled by the Philippine’s own foreign affiars department even when cases are still in court.

"I wonder what will these doormats do now? there is the evidence – they are killing our wildlife which we protect." the DFA of the Philippines is trying to balance concerns over other areas where territory is in dispute. Local officails in Palawan have been fighting a decades long battle with the DFA to those responsible for maritime laws violations punished. Repeatedly however the DFA often intervenes and releases fishermen out of fears of upseting China or Vietnam.

This case however off Balabac Island, the Conservation society pointed out, is near the Philippine border with Malaysia. An area that is over 400 kilometers from the nearest Vietnamese island. Even further away than mainland Vietnam.

Enviromentalists are demanding formal charges in court and enforcement of both Philippine and International maritme laws.


Capt Mitra: We can protect our sea life but need more boats

Mitra meanwhile appealed to the national government to release donated patrol vessels for local government to be able to help the Navy protect areas just offshore. "At the moment, Goheung County of South Korea donated 8 boats to the Provincial Government of Palawan."

The Patrol Boats are small enough to chase poachers faster into areas where large deep draft naval vessels cannot easily get into. "Right now they are in Manila Harbor City awaiting clearance from all the government institutions. From what I have seen, these boats are all not ready for sea and would need repairs before they are shipped to Palawan and used by our Armed Forces and other law enforcement agencies." Mitra, a retired Philippine Marine Captain appealed for help in making the vessels seaworthy.

Mitra also said that there are more poachers inside Palawan municipal waters, "While we were there at the Vietnamese ship earlier, Commodore Peña and my classmate Captain Bacordo asked me about these Korean Boats and advised me what a big difference it can make to use them to go after more Poachers." Mitra commented on his social media page asking for help to make more patrol vessels avialable.