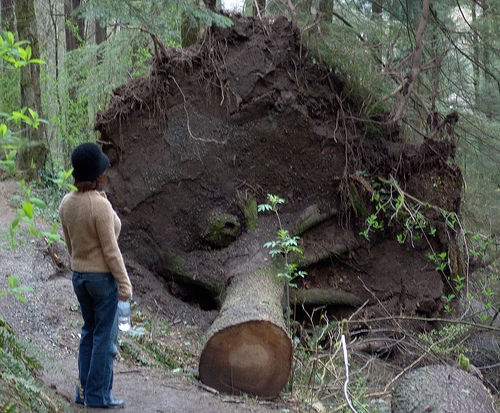 Hardly a day goes by without some mention of the evidence of climate change. The stories often have to do with hurricanes or ice caps. Rarely do the little signs of climate change that we all notice in our lives appear in news stories – they’re just little things, but together they present a larger picture.

A project has been running for about a year on FlickR to track the evidence of climate change that people perceive in their own daily lives. Many of the signs are very small, such as how local animals are acting funny, strange things washing up on shore, or how there are now smog days in places like Portland and Minneapolis. Over the last year over 200 members have posted hundreds of photographs, many with lengthy descriptions and links, on the topic and how they see it.

Many photos are taken of unseasonable weather and the immediate impact it has on plants and the landscape. Some people feel compelled to document how others are contributing to the problem by posting pictures of smokestacks and traffic jams. Red tides and raging floods have also been documented.

It is interesting to note not only what people are seeing, but also how they choose to perceive it.

Some of the most profound effect have been observed by people living in the Scandinavian countries, Australia, South Africa and the tip of South America. The changes from even just one year to the next have been truly startling in some places. However, even in parts of the US with normally gentle weather, some alarming images have emerged. Pictures have even been sent in from scientists working at the polar regions. Of course, there are pictures of melting glaciers and icebergs, but that’s just a tiny sample of the multitude of changes people have noticed. Again, it’s the little things.

Others have chosen to include pictures of how they’re trying to offset their “carbon footprint.” Some are reducing their vehicle usage and air mileage. Others are drying their clothes on the line. Still others have sent in beautiful pictures of windmills and solar panels. Protests from around the globe have been documented along with some of their more interesting participants. In some of the now arid regions of Europe, people have caught snapshots of some methods to try and turn back the clock, such as cloud seeding and creating alpine glaciers.

Some very enterprising individuals are using creative commons images and their own talent to create messages and art to convey the message of global climate change to those who’ve chosen to not notice yet. Topics covered include transport, food mileage and wonton consumer waste.

As many have noticed over the last year, the signs of climate change are all around when you stop to think about it, even if they seem subtle or mundane.

This interesting project is ongoing and available to view or join at http://flickr.com/groups/climate_change/.

Filed under: Health & Science
Share Tweet Pin G Plus Email
previous article: 2010
next article: How To Flatten Your Belly