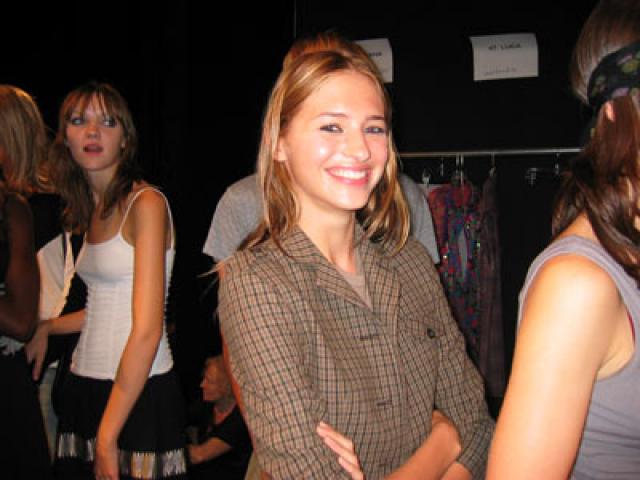 American model Sara Ziff spent five years filming “Picture Me,” a documentary about the underbelly of the modeling world and the damage it can do to its young participants.

From Film Project to Pioneering Exposé

Sara Ziff began modeling at 14, before she had even reached puberty. But that didn’t stop the photographers she auditioned for from treating her like she was much older. In a film that exposes the lewd and psychologically damaging side of modeling, Ziff, now a student at Columbia University, leads the way in a movement to give models better representation in the hopes that this will give rise to a more accountable industry.

“Picture Me” has garnered praise at film festivals including the five-city Gen Art Festival. It started as a film project by Ziff’s former boyfriend Ole Schell. Together the two compiled hours of footage spanning five years: scenes of fashion shows and rehearsals, model interviews, backstage antics and parties, The Observer reports in a profile of Ziff.

The film begins on a high note, showing the happier moments of Ziff’s career, but begins to reveal a more controversial side through Ziff’s and other models’ accounts of sexual harassment and abuse. The film also scrutinizes the industry’s rigorous schedule. It shows an exhausted Ziff “begging to be allowed a day off … haggard and tearful, her skin spotty, her hair dragged back and greasy.”

In the trailer, available on The Observer Web site, Ziff says, “You become used to just having this superficial attention all the time.” Another model adds: “How could you put a 14-year-old in a sexy dress and tell her to be sexy when she’s probably never had sex?” Others sound off about the “high turnover rate” of models. Agencies are continually looking for the “new hot girl” and clients can take advantage of it by paying a cheaper “new girl rate.”

For years, activists like Janet Kilbourne have been exposing and scrutinizing the advertising industry’s promotion of sexualized and degrading images of women. Is it a losing battle?
In an article in The Daily Beast, Ziff and her peers discuss one of the more popularized debates about modeling: body image and eating disorders. From the outside, “people are quick to assume that every model has an eating disorder,” The Daily Beast reports. “People removed from the modeling industry tend to have firm opinions about it, but generally have little firsthand experience,” Schell adds.

Ziff says age may be more central to the matter than most people think. “Girls that are 14, 15 and 16 can be naturally thin in the way that a 30-year-old woman can’t be. Certainly there might be cases of [anorexia], but most of the time it’s not that they aren’t anorexic, it’s that they’re extremely young.”

To Ziff, the heart of the matter is the “Peter Pan syndrome” in the industry, which refuses to let women age. She told The Daily Beast she is still grateful for her experiences: “Fashion is all image and perception, and I think being framed by others gives you a greater sensitivity to doing the framing yourself.” Ziff adds that she believes a union might be one solution for what ails the industry.

Background: The rise of the airbrush—and the revolt against it

A magazine’s photo retoucher may be its best asset. Retouchers use Photoshop to banish cellulite, wrinkles and zits, and to otherwise transform skin texture. Celebrities can also be rendered thinner, paler or more tanned.

As retoucher Melissa Spector explained to Current TV last year, “Every advertisement you see is retouched…in advertising you have to sell the product…who’s going to buy all these magazines if the celebrities look awful?” Spector then went to a newsstand and analyzed magazine covers, speculating that actress Keira Knightley’s eyebrows, lips, legs, nose and skin had all been altered. Spector emphasized that people “shouldn’t put it on themselves to also look like [celebrities and models]…that’s not reality…what they’re seeing is not what is real.”

Since that video aired, before-and-after retouches have started surfacing on the Internet with great frequency. Some victims, such as Kim Kardashian, have come out in defense of their curves. Kardashian declared on her blog in March, “So what: I have a little cellulite … What curvy girl doesn’t?!" the New York Daily News reported.

Actress Jamie Lee Curtis beat Elle to the punch in 2002 when she posed for the cover of More magazine with “[n]o lighting, nothing. Just me. No makeup. No styling. No hair. No clothing,” as she described it to CBS News. Concerned with the amount of retouching magazines like More tend to do, Curtis brought a candid attitude to the shoot, even though she said she admitted to struggling with how her body has changed since her youth.