To many, the history of the Stryker vehicles, based on the LAV/Mowag vehicles, is an endless list of mishaps, misconceptions and misuses which have plagued its operational history. Though it was not immune to technical flaws, the Piranha 3 was blamed for more than it should be. And although it is now too old to enter a competition for modern-day military equipment bids, one can only hope that the Piranha 5 (its modern-day version) will not be fielded in the same slapdash way. 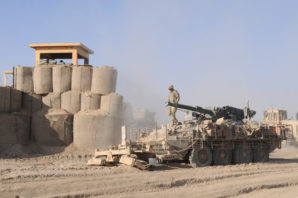 The Piranha’s job wasn’t easy from the start, and things went downhill from the starting line. The vehicle was designed to be intermediary. It was to fill the gap between nimble units able to move fast but low on firepower, and heavy units which can steamroll battlefields but can take weeks to deploy. Because of their weight, dimensions and complexity, some transport vectors, namely aerial, are simply barred options for heavy armor, which can weigh in excess of 70 tons. And while boats are able to carry enormous cargo, they are notoriously slow and will only go half the way, unless the battlefield is right on the shoreline. The Stryker family of vehicles, which was eventually formed into a brigade, was therefore to bring an in-between solution, on the array of firepower and mobility.

Unfortunately, the new mix didn’t work out as planned. The Piranha 3 was fielded in Belgium, New Zealand, Canada, Brazil, Denmark, Sweden, and many others. And in almost all cases, the deployment revealed itself problematic. Israel, whose tactical equipment assessments are always taken seriously by exports worldwide, due to their military history and current situation, scrapped it as “a piece of junk”. The gimmicks fitted onto the Stryker vehicle initially won soldier’s hearts, but the honeymoon quickly faded out.

The compact design of the Piranha 3 turned out to be highly problematic, when not outright dangerous. When the Stryker guns were first deployed in Iraq in 2008 (in its MGS/Mobile Gun System version), soldiers realized that the very limited space inside left the crew of 3 men exposed to several risks and problems. The vehicle was able to deliver canister shots, in the manner of a giant shotgun, which provided infantrymen with very large firepower in close quarters. But in its arbitrated configuration, the top weapon mount was left unarmored, in order to save weight, which led to the gun-pod being easily neutralized, even by small arms fire. And given that the vehicle’s sole purpose was to deliver fire-power, inability to do so would transform it instantly into a slow and clumsy truck. In the likely event of a fire, operators could not evacuate quickly and risked burning to death. The soaring heat of the environment caused the temperature inside the vehicles to reach up to 150 degrees Fahrenheit, exposing soldiers to high dehydration hazards. This threat could not be countered with simple air-conditioning, as such a module couldn’t be fitted either in or on the vehicle. As a result, soldiers had to quickly be fitted with makeshift cooling vests to avoid dangerous overheating.

Despite the technical flaws and the fact that its tactical irrelevance was becoming known to all, New Zealand signed a contract for 105 Piranha 3 vehicles which eventually became so controversial that it sealed the coffin for the vehicle thereafter. Thanks to a well-established network of high-level contacts within the New-Zealand government, it was sold the Army, despite a lack of need for such a vehicle which became quickly visible despite officials doing their best to quash the scandal. And when, due to its lack of mobility, it failed to provide cover during an operation, which led to the death of one soldier, the reputation of the Piranha 3 was destroyed forever. Pressure had been mounting against the vehicle since the initial price-tag for the entire batch of 105 Lav-3s had soared from NZ$ 250 million to 680 once it was signed. In the fateful events of 2000, when NZ infantryman Leonard William Manning was shot by militia during the UN deployment in Timor, the Stryker vehicle couldn’t overcome the rough terrain and provide cover, while an aging Bradley M113 (the vehicle which the Stryker was meant to replace!) did manage. The NZ Piranha 3 was marked with infamy from then on.

The military’s wish for an intermediate weapons system, combining the nimbleness of small units and the power of large ones resulted in a stillborn half breed which wasn’t much good on either side: it could be outrun by traditional infantry units, and beaten to a pulp by traditional armor. Sales representatives didn’t dare tell officers that their demands were unrealistic, for lack of losing the deal, so they just stretched the specs sheet. For instance, the MGS Piranha 3 claims to be able to defeat traditional armor with its 105-mm cannon. Which is technically true, if the opposing armor is a Russian T-62, which is half a century old. Anything more modern (which is to say about any armor in the world, save a few struggling under-developed armies), would rapidly crush the Stryker.

The reasons for the terrible failure of the Piranha 3 were more political than technical. The United States army demanded, as disconnected clients sometimes do, capabilities that were simply far beyond what was technically possible at the time, in their ever-going race for military global domination. In a desperate attempt to bag the deal and an atmosphere of cool-headed bogus-selling, GDLS simply nodded to the unrealistic demands of their customer and then delivered whatever they had in store. Its integration within military units was therefore doomed from the start, before it was even fielded. Though the Piranha 3 is, today, clearly outdated, it must be judged within the epoch during which it was designed and sold, and the way it was procured. It shouldn’t therefore bear the brunt of the criticism, which should be directed towards the uneducated decision-makers. Its descendant, the Piranha 5, is more at par with what can be asked from an infantry fighting vehicle, nowadays. While its characteristics are not outstanding, it is a decent choice which hopefully will be considered in a more responsible way. Both Piranha 3 and Piranha 5 are currently on the starting-block in the context of a new call for tender for the British Army. “British Army boss Gen. Nick Carter has fired the starter’s gun on a program to equip his forces with an eight-wheel-drive armored fighting vehicle by telling an audience at the DSEI defense exhibition here that a program to supply a mechanized infantry vehicle would get underway soon”. Let’s hope that British officials will learn from American mistakes.