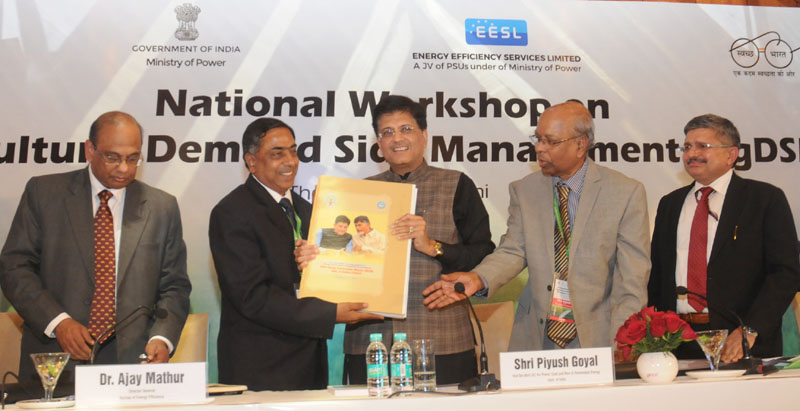 The Minister of State (Independent Charge) for Power, Coal and New and Renewable Energy, Mr. Piyush Goyal at the valedictory function of the Agricultural Demand Side Management National Workshop, organised by the Energy Efficiency Services Limited, in New Delhi on January 18, 2016.

With Special Focus On Quality Maintenance And Competitive Pricing

New Delhi (PIB-GR-TYP-BIN): Mr. Piyush Goyal, Minister of State (IC) for Power, Coal and New & Renewable Energy said that the center-point of any responsible government is the welfare and the future of the farmers. Mr. Goyal said this while delivering valedictory address at the Ist National workshop on Agriculture Demand Side Management (AgDSM) being organized by Energy Efficiency Services Limited (EESL) on January 18.

In his interaction with the Agricultural Pumps manufacturers and other stakeholders at the workshop , the Minister urged them to scale up production capacity with special focus on quality maintenance and competitive pricing. Mr. Goyal stated that India will require 3 Crore energy efficient pumps in the next 3 and half years and so Agriculture Demand Side Management projects can be helpful in providing start-ups and employment opportunities to the people of the country. Congratulating EESL on launching the initiative, Mr. Goyal said that there is no doubt that this programme will be a success story for EESL in creating an energy efficient ecosystem for farmers.