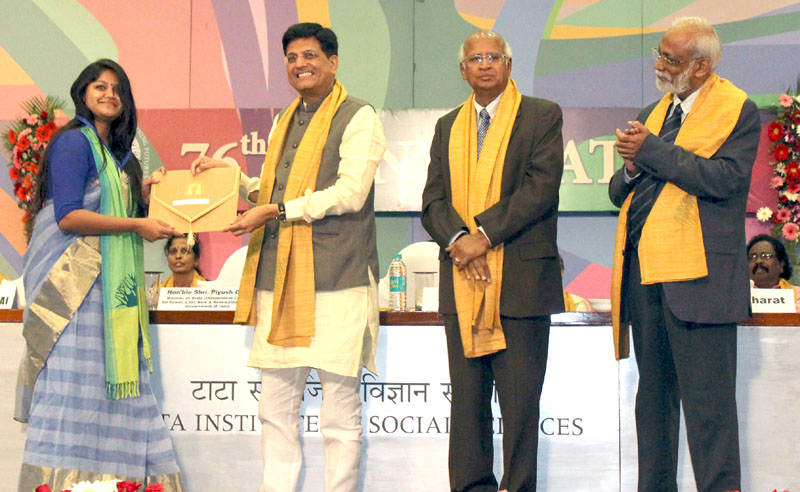 The Minister of State (Independent Charge) for Power, Coal and New and Renewable Energy, Mr. Piyush Goyal honouring the meritorious student at the 76th convocation of the Tata Institute of Social Sciences, in Mumbai on May 07, 2016.

‘India Would Emerge As A Super Power’

Mumbai (PIB-GR-TYP-BIN): Mr. Piyush Goyal Union Minister of State (IC) for Power, Coal, New & Renewable Energy urged the Tata Institute of Social Sciences, TISS to conduct social sciences training programme for ministers. “TISS should consider training programme in behavioural sciences, ethics and leadership for ministers and other public servants” he said while addressing the 76th Convocation of the Institute in Mumbai on May 7.

Mr. Goyal said behavioural science impacts society deeply. He said across the country, public servants should be sensitized on how to deal with the poor and the downtrodden who approach them seeking some help. Stating that a continuous learning programme for the ministers and bureaucrats was a good idea, He said a beginning could be made with Mumbai and Maharashtra, which could be extended to other parts later.

The Minister recalled the vision of the House of Tatas in setting up the social sciences institute way back in 1936. He asserted that over the next 20-25 years, India would emerge as a super power, but stressed that the country has a long way to go, in terms of providing health, education and power for all its citizens and ensuring an inclusive growth. “The task ahead is onerous, but certainly doable”, the Minister said.

Mr. Goyal said Human Resource Development is the important function in any organization that wants to succeed in the long run. He said TISS has empowered its students to take up leadership roles in the society. The Minister urged some of the students to consider politics as a career option as well. “The days of the famous saying “politics is the last resort of the scoundrel” are no more applicable in India. How much ever you may criticize the politician, the reality is we will need honest and good people to ensure good governance.” Mr.. Goyal said.

The Minister complimented the efforts of Mumbai Municipal Corporation sweeper Sunil Yadav, who secured the TISS M. Phil degree. “Sunil Yadav securing M. Phil is an inspirational story. It encourages us to contribute to the society”. Mr. Goyal urged the graduating students to be part of the movement of development.

The Minister honoured the meritorious students with medals and shields in different fields of social sciences. Mr. S. Ramadorai, Chairman, Tata Institute of Social Sciences, in his welcome address spoke about how the institute collaborated with government in the field of climate change as a run up to the Paris Conference.