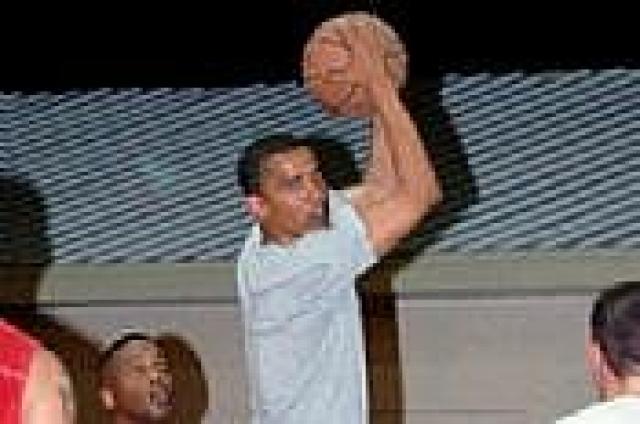 President-Elect Barack Obama is bringing more than just HOPE to the White House—he is bringing HOOPS! He will be the best basketball player that the Oval Office has ever seen. This article will help you to hoop like Obama.Switch your allegiance to the Left—you don’t necessarily have to support left-of-center politics—just make sure you are a lefty like Obama.

Master Obama’s "signature move"—ball and head fake to the right and veer left. Your opponent is used to players going to the right, so this will be effective.

Love playing in pickup games. Obama enjoys regulation games, but he loves the informal nature of the pickup game, as it truly reveals the character of the players. It’s also a good way for kids to learn the game (like Obama, just make sure you hold off on signing autographs until you hear the buzzer).

Be aggressive. Obama fears nobody on the court and is never afraid to stick his nose right in the middle of things.

Play fair and respect the game. Although Obama likes to mix it up and get the best of his competitor, he respects the game and will call a foul or violation on himself.

Be an equal opportunity "trash talker." Like Obama, you must be willing to have a trash-talking dialogue with even your worst enemy on the court, without preconditions.

As a student of the game, carry a basketball with you wherever you go. For Obama, the ball has an extra special meaning; it was the last gift his father gave to him.

When you are in a team huddle with 3 seconds left in the game and your team is down by 2 points—get the whole team chanting: “Yes We Can!”

Admit that you stink at bowling, take over your local bowling alley and convert it to basketball courts (Obama has a contractor he can recommend, but they will be busy at the White House in January).

Have your sister marry a former Princeton University basketball star and current Division I coach. Make sure he is your teammate at the family reunion and you will dominate!

If you are feeling stressed, get some buddies together for some pickup basketball. Our President-elect was "hooping" with his friends on Election Day in Chicago.

Be "presidential" in your approach. Work on your game and always look for ways to improve—the commitment you make may transform a country forever!
Filed under: Sports
Share Tweet Pin G Plus Email
previous article: US judge orders psychiatric test of Dr Aafia
next article: Akram Slams Ponting for Insulting Sunil Gavaskar