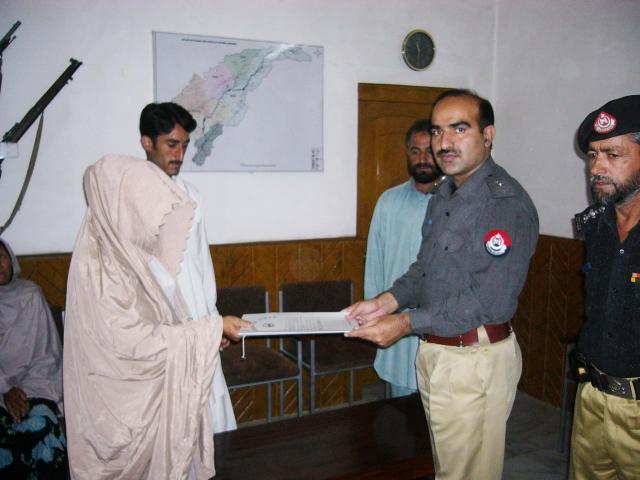 Documents of Plots distributed among widows of Martyred Police officials.

CHITRAL: District Police Officer Chitral (DPO) Sher Akbar Khan distributed plots between widows of police officials who were martyred during their office duty. According to detail DPO Chitral distributed documents of 5 and 10 Marla plots among heirs of martyred police official at his office in a simple function. Documents of 5 Marla plot at Regi Lalma Peshawar were handed over to widow of Islamuddin Head Constable. Similarly he handed over documents of 10 Marla at the same location to wife of Gulsambar Khan Assistant Sub Inspector. Both police official had been killed in a bomb blast during a suicide attack at Arandu Pak Afghan border village a few years back. Zafar Ahmad son of Islamud Din also has been recruited in police force and now he performing his duty as Station Head Officer (SHO) Police Station Drosh. Addressing to the ceremony DPO Chitral Sher Akbar Khan said that although this is not substitute of our martyred cops who sacrificed their lives during duty hours hence recording to police policy this only to compensate the bereaved family. He paid rich tribute to both police officials and termed their sacrifice gratitude for the department.

Meanwhile talking to local political and religious leaders DPO Chitral strictly warned that no one be allowed to deteriorate peaceful environment of Chitral. Every miscreant would be crush at every price if tried to create law and order situation in the district DPO added. He said that Chitral is a peaceful district and we will maintain this situation at every cost and every militant or miscreant would be handled with iron hands.