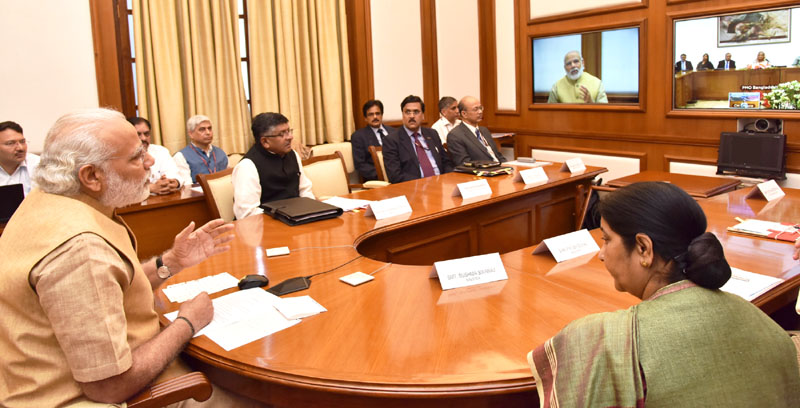 New Delhi (PIB-GR-TYP-BIN): The Prime Minister, Mr. Narendra Modi, and the Prime Minister of Bangladesh, Mrs. Sheikh Hasina, jointly dedicated via video-conferencing, the second cross border transmission interconnection system between India and Bangladesh on March 23. This will link Surjyamaninagar in Tripura with South Comilla in Bangladesh.

The two leaders also dedicated the transmission of 10 GBPS internet connectivity between Cox Bazaar in Bangladesh, and Agartala.

Speaking on the occasion, the Prime Minister hailed this as a historic moment in India-Bangladesh ties. He recalled the warm association that Bangabandhu Sheikh Mujibur Rahman shared with India. He welcomed the many avenues of cooperation that have opened up between the two countries in recent times, and praised the Prime Minister of Bangladesh, Sheikh Hasina, for taking forward Bangabandhu’s vision and thoughts.

The Prime Minister said he attaches tremendous importance to the opening up of the new internet gateway in the eastern part of India, and said it would greatly benefit the North-eastern states by giving a boost to communication in the region. He highlighted the multiple channels of increased connectivity between the two countries in recent times, including road connectivity and digital connectivity.

The Prime Minister offered all support to Bangladesh, for the launch of the Bangabandhu satellite. He extended best wishes to the cricket teams of both countries for the T-20 cricket match today.