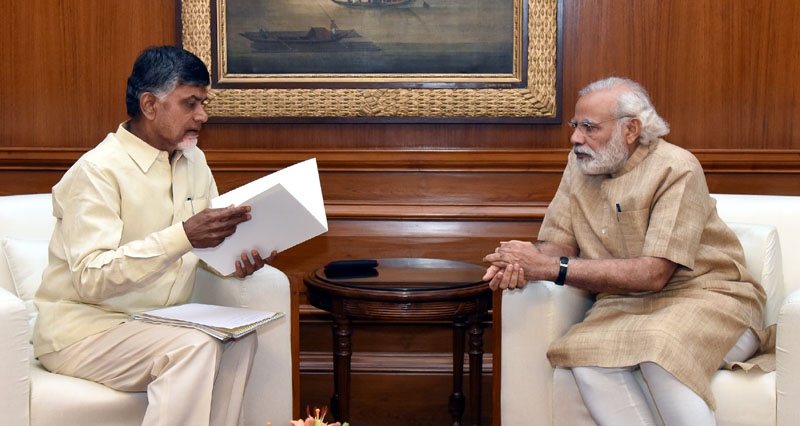 New Delhi (PIB-GR-TYP-BIN): The Prime Minister Mr. Narendra Modi, chaired a high level meeting on the drought and water scarcity situation in parts of Andhra Pradesh. The Chief Minister of Andhra Pradesh, Mr. N Chandrababu Naidu was present in the meeting. Senior officials from the Government of India, and the State of Andhra Pradesh, were also present on May 17.

The Chief Minister described the State’s efforts in building check dams, reviving lift irrigation schemes, and deploying mobile sprinkler units (rain guns) as part of the drought mitigation effort. He mentioned the State’s progress in micro-irrigation. The State has a target of 20 lakh hectares for micro-irrigation by 2022. Global best practices and research in the field came up for discussion.

Appreciating the State’s efforts in micro-irrigation, the Prime Minister directed setting up of a task force to comprehensively study the economic impact of drip irrigation in the States of Maharashtra, Andhra Pradesh and Gujarat, on various parameters such as water saving, enhanced productivity, and savings in terms of reduced input costs of fertilizer, pesticide and labour.

The Chief Minister, praising the Prime Minister for his initiatives of neem-coating of urea and the assistance of Rs. 1500 per tonne offered for compost made from municipal solid waste, stated that these will go a long way in improving soil health and checking the diversion of urea.

The Chief Minister also made a brief presentation on how the State Government is using technology to get real-time updates on water and agriculture from the field. Appreciating these innovations, the Prime Minister urged the NITI Aayog to set up a task force in consultation with the State that could come up with a model on how to use technology for crop insurance.

The meeting ended with a resolve on the part of the Centre and State to work together.